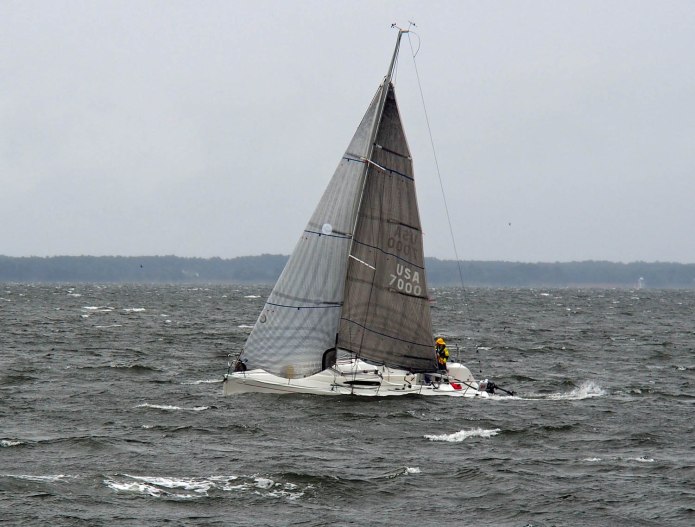 Can’t use the camera when really crashing, but took a few pics when calmer. There were a few sailboater (it is Sunday) who maybe like this weather. This one had more sail up than most of them.

We made it 90 miles down to Chesapeake Boat Basin in Kilmarnock where we stayed a few nights last year. Not quite in the middle of nowhere but close. The trip was pretty close to our expectations from the weather and waves report.  They all leave this marina at 1 on Sundays, so we got in and tied up at the gas dock, the only place left. They left the keys to the borrow car for us so we drove into Kilmarnock and went to McDonalds for dinner and then to Walmart to stock up the boat.

The forecast for Monday was 3’ waves for the first half to Norfolk and then 4’ for the second. We decided that would be too much and got permission to stay on the gas dock Monday. The dockmaster said “If it’s that bad outside no one will be coming in for gas anyway.”

Traveling at twice my speed, this guy is not affected by the current weather.

There was no change when I checked the weather/waves before going to bed, but when we got up it had backed off from 4’ to 2 – 3’ for Monday and Monday night, so we decided to go. Only 60 miles total so leaving at 9 was not so bad.

We had a smooth ride 4 miles out on the Indian river, but when we entered the main bay we got plastered. I had not gotten around to opening up the flybridge yet which was lucky when we went head on into some big ones. The bow crashed down and water sheeted up to the flybridge roof. Had I opened up the first crash would have completely soaked us. As it is it only knocked both our full coffee cups off the front dash making a huge mess. We had already locked things downstairs so no damage there. Sue did start to get up to check on things downstairs but quickly sat back down. No way she could stand or walk in what we were getting. She yelled “we have to turn back”. I am the captain, but the admiral is permitted to overrule me in some circumstances. That suddenly seemed like a great plan, so we quickly got back into the quieter river and made our way back to the gas dock.

This could not have been more different than when we left Kilmarnock in May of last year.

It’s not often we have gone out and then had to turn back. I think there was only one other time in 5 years, but I can’t remember what it was. The violence of what we hit was quite a surprise.  Of course inlets can be tricky, the wave predictions are not always right, and technically the prediction was for mid day Monday and Monday night. Maybe it’s been getting better out there. The Tuesday prediction was for 2’ waves all the way, and still holds as I write this. I assume that will still be the prediction tomorrow morning, so we will get out early and hopefully find things better.

One thought on “It’s Rough Out There”