Just leaving Kilmarnock before 6 AM, looking down the Indian River.

Indian creek was very calm as we left just before 6 this morning. Once we got out on the bay it was flat with no waves at all. The wind came up after 15 miles as we hit the mouth of the Potomac river. The rivers that run into Chesapeake bay are all very wide. It took us 12 miles to cross the mouth of the Potomac. The wind was from the northwest, same as the river, so it had more than a 20 mile fetch to kick up some 3 footers that hit us on the “port front quarter” as they say. Not such a bad place to take waves.

After we crossing the river mouth the wind and waves turned directly at our front, right down the length of the bay, so we hit the waves and crashed a little, but not enough to ring the bell. Our wind gauge was regularly showing 40 mph, which meant 30 mph winds. It has a way to show the maximum gusts for the day, which read 50. That was a lot of wind. 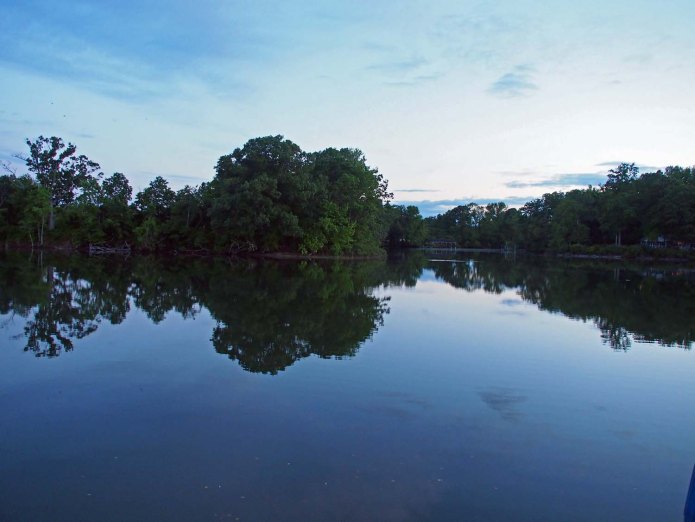 Off the back of our boat just before we left Chesapeake Boat Basin. Sue likes a view where we tie up.

Awhile after we arrived at Solomons Sue happened to look up and noticed the dinghy cover was almost blown off. Only one of the 4 straps that hold it had come loose, but that was enough for two others to work there way up toward the dinghy front. The wind was less than 20 at the marina when she noticed that. Still enough to make it great fun getting that cover back on.

Sue still thought that trip was much easier than the one out of Norfolk, and I agree with her. Short trips are better in that kind of weather, so we got to Harbor Island Marina in Solomons MD by noon. 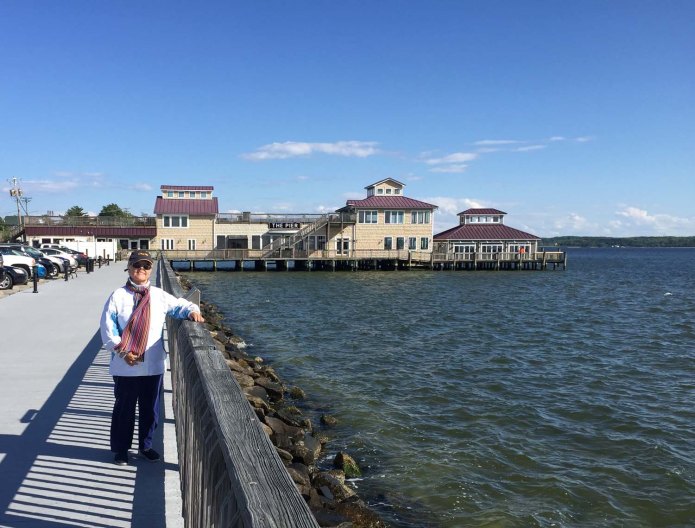 The boardwalk. Locals said the big restaurant behind is popular with the younger set but pretty noisy.

It warmed up and the wind dropped more so we walked around a bit. Before Sue was ready I walked to the end of the peninsula and visited the University of MD Chesapeake Biological Center and watched a few videos of the various graduate student projects regarding bay ecology. One was measuring Methane trapped in the bottom sediment, another jellyfish populations, etc.

Harbor Island Marina is small and not so elegant, but its restaurant is good and highly regarded around here.

Sue and I walked up the peninsula visiting various shops along the way. This is quite a tourist area with a long boardwalk and many restaurants in our area. According to the locals the restaurant at our marina was one of the best, so we finally returned there for dinner, ordering two of their Tapas each instead of regular dinners. That turned out better than average.

Weather looking even better for a trip up to Annapolis tomorrow. 1 – 2 foot waves all the way. 10 mph or less winds predicted, but I think that is from the land. It has been easily 10 mph more than the land prediction (Weather Underground) out on the bay.

One thought on “Across the Potomac to Solomons”