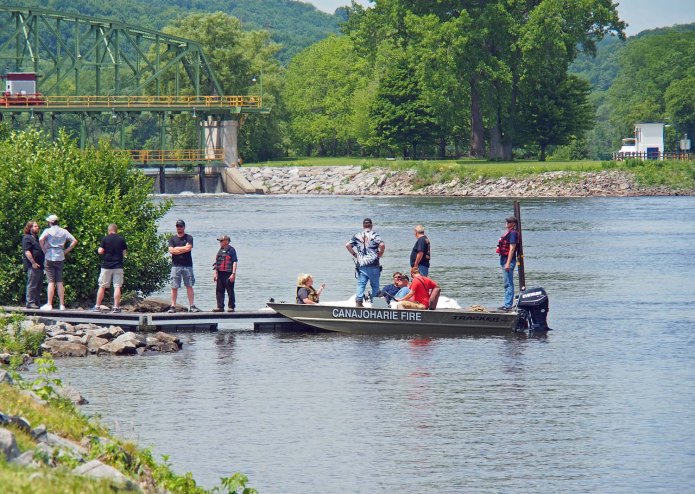 The volunteer fire department monitored the rubber duck race. No buckets aboard. Just for transportation? 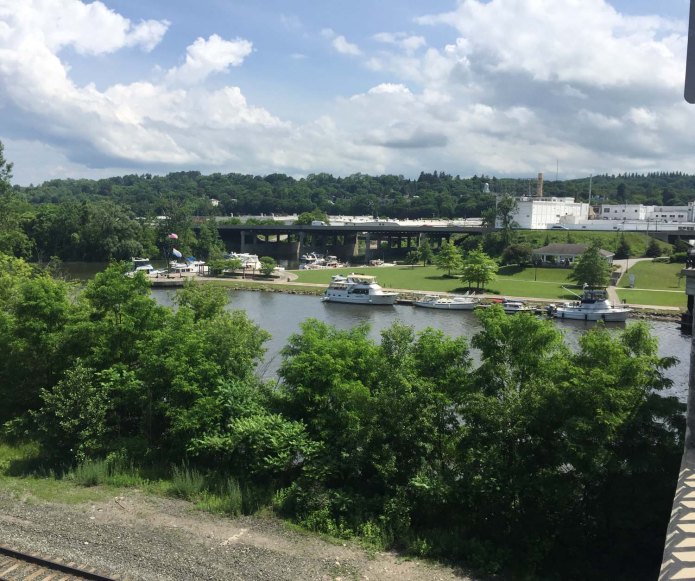 Looking from the bridge. Star Gazer in the center. Old Beech Nut factory above. A lot of boats Saturday afternoon.

Saturday morning lock 14 was closed from 9 to noon for the rubber duck race. The city of Palatine Bridge, across the canal from Canajoharie, puts this on every year and this was their 150th anniversary. Five dollars per duck to raise money for something. We attended, but they need to spice that up somehow or we won’t be back for it next year. Across the bridge they had a big barbeque and old car show in the Big Lots parking lot. 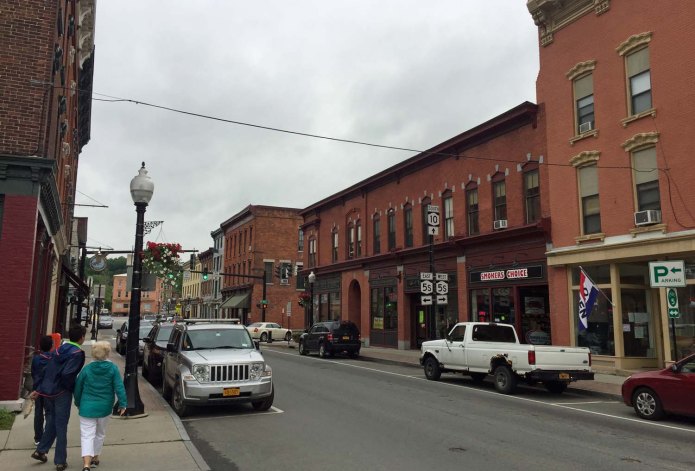 Church Street. Nearly all buildings occupied, but times are tough. 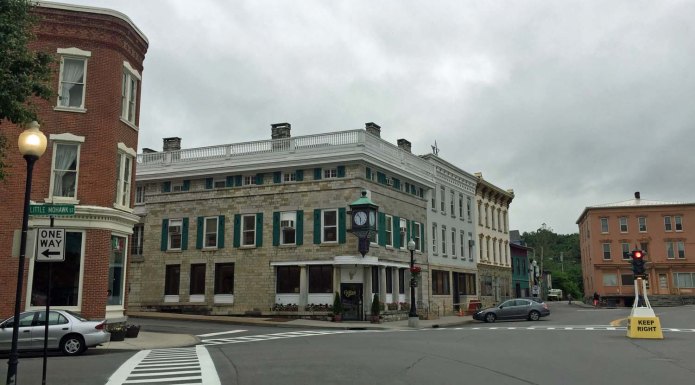 As close to a town square as we could see.

We enjoyed the town on our side. This is the kind of thing we came to see. Beech Nut built this town and their abandoned factory still dominates down by where we’re docked. They used to sell candy, gum, soup, nuts and all sorts of other foods when we were kids. Now they only have baby food and that’s moved off to another town. Locals in the shops talked about how much they liked living here and lamented the loss of so many jobs. This is part of the country that voted for Trump, hoping he can bring some of the jobs back. 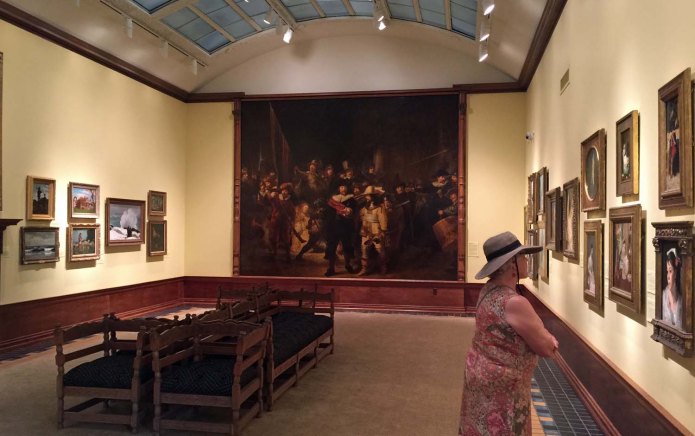 Beech Nut started the Arkell art museum. Not world class, but definitely worth a look. 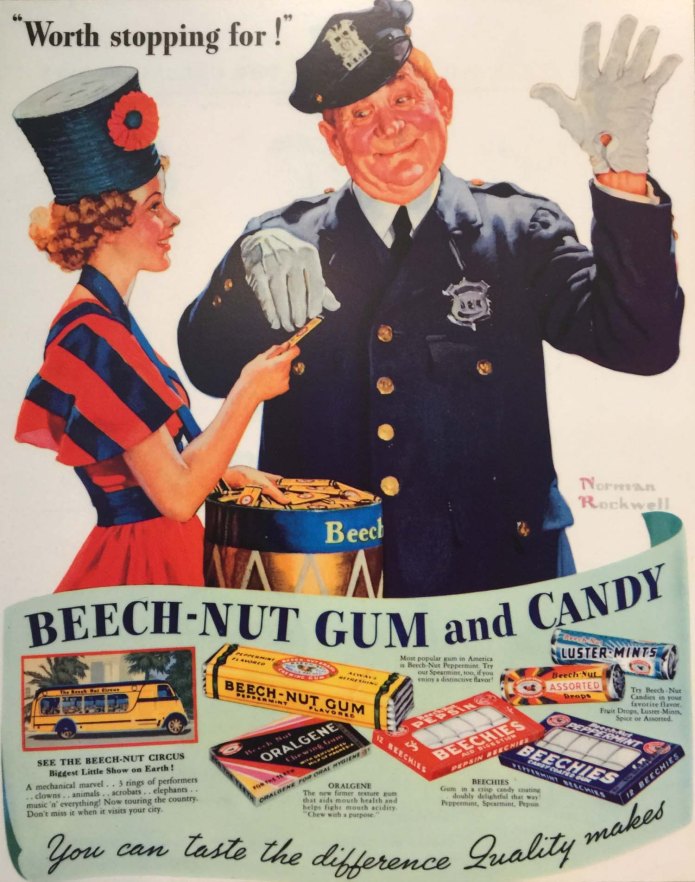 Sue walks in the room: “That looks like a Norman Rockwell.” The original (without ad copy) was hanging beside it. 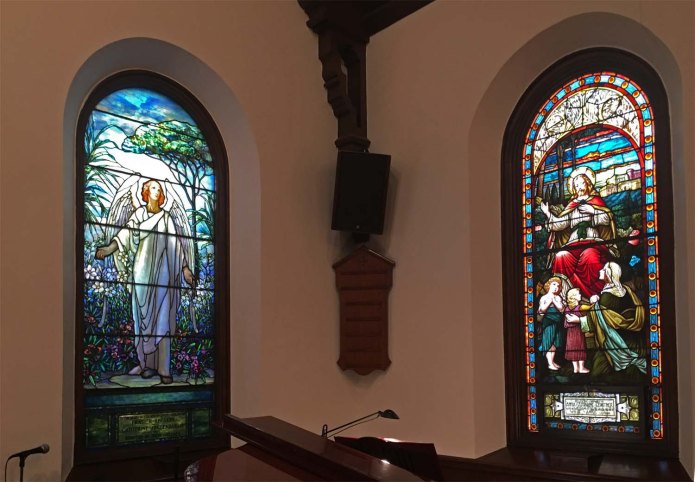 Sue again: “That one’s different. Doesn’t it look like those Tiffanys we saw in the Met?” We found out it was a Tiffany.

Canajoharie is Indian for “boiling pot”. We’d heard about that and asked the the staff in Gino’s restaurant, where we ate Saturday evening. Three of them were local, had seen it as kids but could not remember how to get there. The cook in the back knew. Later Sunday the kids and I hiked to the other end of town, which fortunately in Canajoharie is not very far. It was more than expected. We saw the famous pot and small waterfalls and water running over rock both above and below it. Sue should have come on this one. It reminded me of Happy Isles at Yosemite before the big rock slide. 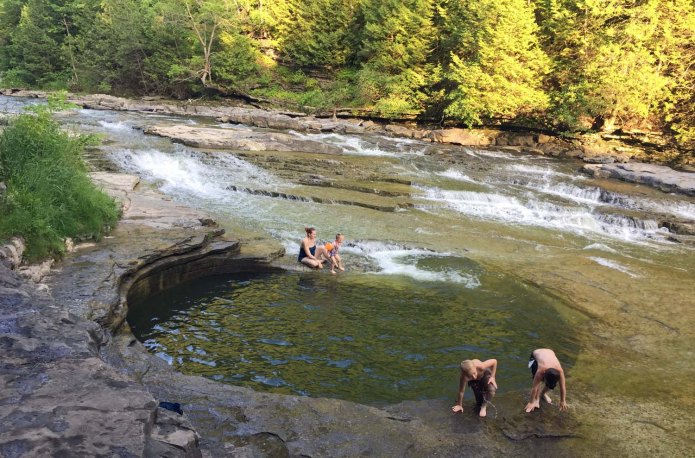 The Boiling Pot is the only pool deep enough for swimming here. Not much of a crowd for a warm Sunday afternoon. 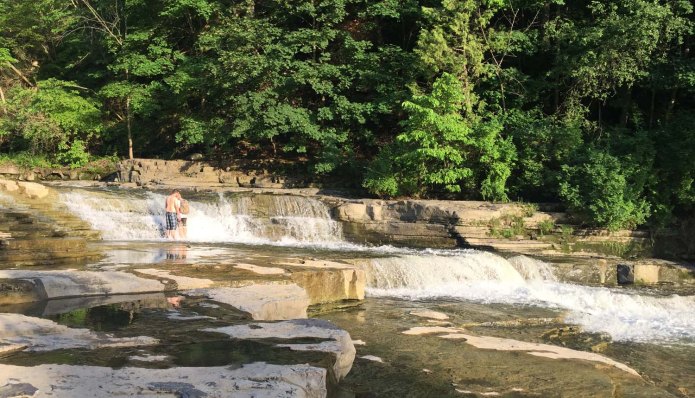 Falls and rushing water both above and below the pot. Really nice. Why more people are not here I don’t know.

One thought on “Canajoharie”