Didn’t see a lot on our trip west. This and two or three sailboats in the distance.

After a down day in Gore Bay ON we left early and went 60 miles west to Drummond Island. We woke to a light rain which became heavier by 7 AM when we pulled out of the marina. Most of the trip was open water, the temperature was not cold at all, and best of all the wind was going our speed in our direction. That did kick up some reasonable westward waves which grew as we went in their direction, but they traveled nearly our speed so we hardly noticed them. The rain was off and on as different fronts moved eastward over us. Apparently the upper air went east and the lower west because our tailwind lasted the entire trip.

We picked up a little over a mile per hour speed from a current going our direction also. I wondered there could be a current in the great lakes. The overall flow of water there is east to the Atlantic, but that is not noticeable in the great lakes. I did learn that wind driven tides can be as high as six feet at the east and west ends of some of the lakes. Quite a lot of water would have to flow to accomplish that. That must have been what we saw.

The chief draw of the North Channel seems to be great anchorages in the middle of nowhere. We’d already been in the middle of nowhere a lot, and it was great, but it was time to move on. We have a three night reservation at Mackinac Island Marina starting tomorrow. Mackinac Island is a popular vacation spot with a short season, and people reserve places at the marina months in advance. We can’t plan ahead like that, but still managed to secure our three nights just last week. It probably helped that they were all weeknights. 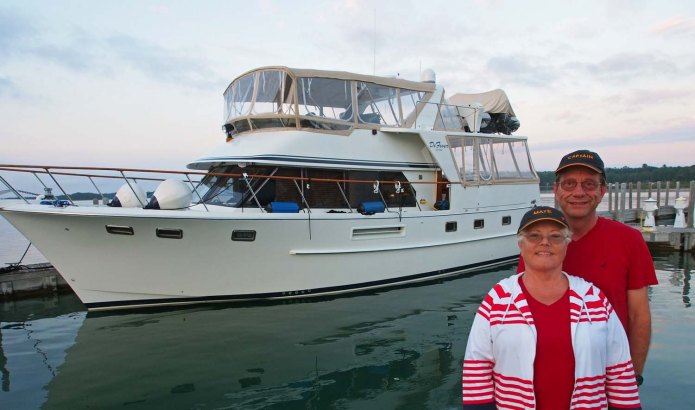 Paul took this of us and Star Gazer at Drummond

We travelled open water although in sight of the north shores of Manatoulin, Cockburn and finally Drummond islands. I played with the radar to see how easily it could find boats around us. The rain decreased its range, but decreased our seeing range even more. Paul spotted most boats before I did. I noticed a boat on the radar well before I could spot it, and whenever Paul saw one I looked at the radar and there it was. A boat that is a barely visible speck is a pretty noticeable spot on the radar. So far we’ve needed the radar only once, but it’s nice to have.

We arrived at Drummond Island Yacht Haven about 2 PM and pulled up to the fuel dock. When you first enter the US you stay on the boat until the border control agent comes. She came up the back steps and had me fill out a form, looked at our passports and then went quickly through the boat, just looking into each room. I paid a small fee for a sticker and that was it.

We’ve heard a lot about Mackinac Island. Paul and Sharon have been there. We’ll meet Marty and Cheryl, Paul’s brother and sister in law there as well. They’ll be tourists with us on the island and then travel a few days with us down the Michigan coast.