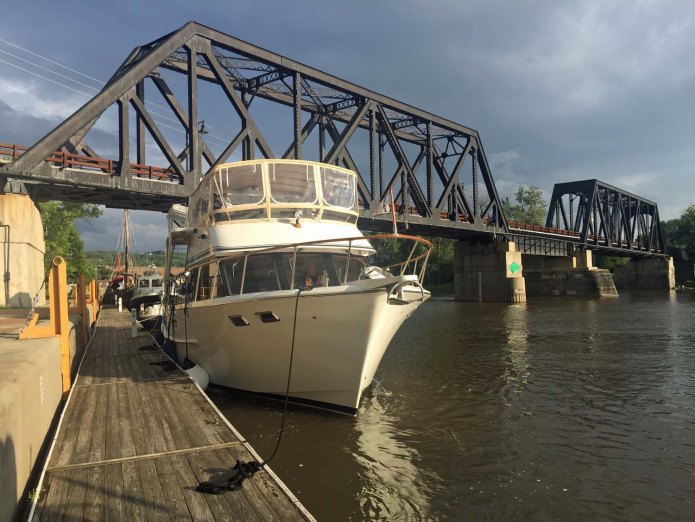 Star Gazer at Waterford Visitor Center free dock. They ask for $10 donation to use the power. Great deal!

We turned off the Hudson at Waterford, 20 miles north of Albany. Waterford Harbor Visitor center is a free marina right at Erie Canal lock E2. Lock 1 is no more, apparently of historic significance. The canal is part of the Mohawk River. Where the river is dammed, a side channel with one or more locks has been constructed. We’ll be traveling on the third canal. The charts I use still show some old abandoned canal sections alongside the current one. I’m told that in one place a part of the previous canal goes over the current canal in a water filled bridge.

In the meantime Waterford, 25 minutes north of Albany, is an interesting small town. We saw a bit of it driving through on our way to Walmart for resupplying. The last major resupply was in Washington NC. We saw more in walks to the area across the bridge at our marina. We stayed an extra day here because it was forecast to be rainy all day. Not stormy or dangerous weather, especially in the rivers and canals we’re in now, just wet and a bit miserable. It turned out not so bad. I’m getting a bad reputation as a weather forecaster these days. I’ve done OK on wave heights and storm conditions, but pretty bad on rain.

The hot weather we had from Washington NC up to NYC went away when we got on the Hudson. Hudson weather was breezy and very agreeable overall, but we did have some light rain and a bit on the cool side on the last leg from Kingston to here. 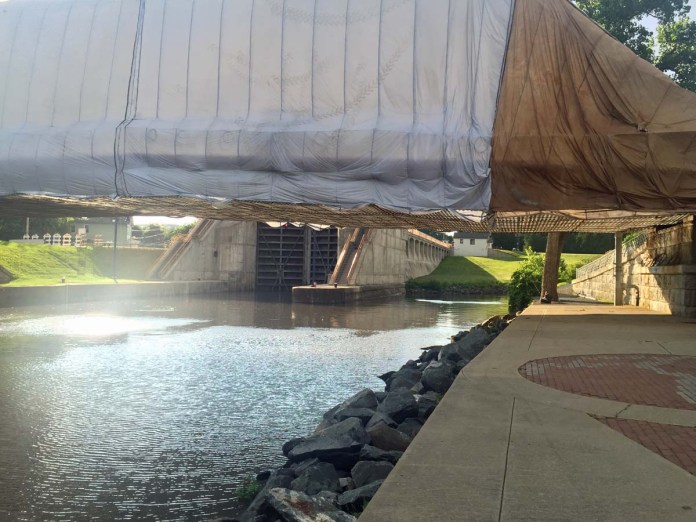 I’m standing just ahead of where we’re docked. Under the bridge you see the lock E2 gate.

Anyway tomorrow and the next few days should be great. Water in this part of the Erie Canal system is maybe a foot higher than normal, but we should get under all the bridges. The lowest is right in front of us, made a little lower due to construction. The 4th street bridge will be 20’. Keith and I measured the boat and decided it is maybe a bit less than 19’ high. I was thinking it was 20’. Looks like we’ll go under everything here.

Locks open at 8 AM tomorrow. I’m told nearly all boats go westward this time of year, so they should be opening in sequence to get us through quickly.

2 thoughts on “At the Erie Canal”