Today was the big day. I meant to get into the canal on July 1, so we’re only a day late. We locked through with four boats each time. We took the front right side of the lock all the way through. I learned that a group of boats going through a close sequence of locks keep the same relative position in each lock. This allows them to put their fenders of the port or starboard side and keep them there. 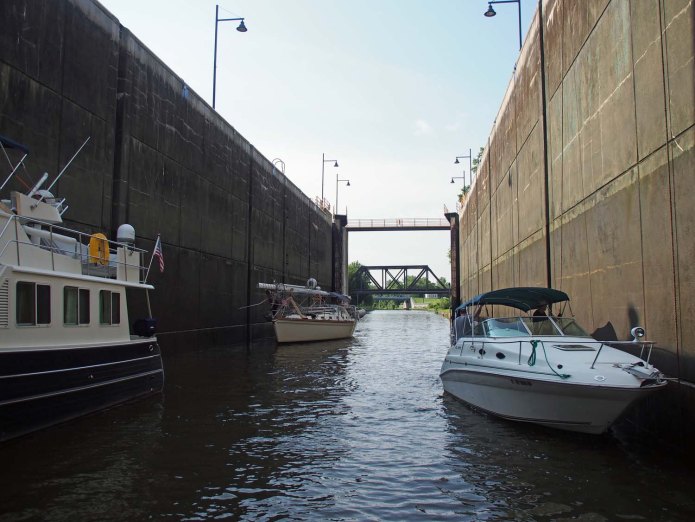 Looking back in the first lock, before the back gate closes.

All the Erie locks are 328 x 45 feet. This gives room for a gate swing at one end and three boats like ours along one wall. Four would fit but it would be crowded and more difficult to keep off each other. The original Erie canal was only 15’ wide. Our 16’ beam would not fit into that.

Right at Waterford we split off from the main stream of the Mohawk and went into the first lock. That turned out to be a bit hair raising as we figured out the best way to tie up our boat in an Erie Canal lock. Over the past year the educational videos and information I’ve had indicated you tie off at both the front and the back to hold your boat against currents and turbulence from the incoming water when locking up. When we got there the tie up cables were vertical, recessed into the wall, and about 80 feet apart. We finally wrapped our spring line, at midship, around the cable and held the boat at only one point. I bought a canal pass from the lockmaster at the first lock, and learned from him that we did things the right way.

Sue and Gayle relaxing on the Mohawk river (Erie canal).

Locks E3 through E6 came one after the other, each opened and expecting us as we arrived. Once through these we rejoined the Mohawk. At each lock there was lawn on both sides, picnic tables, restrooms and everything a park would have. The lock areas double as parks and people come here to watch the boats. The Erie has a bike path along it as well. There are homes and small neighborhoods along the canal and the Mohawk. Not the mashed in home after home seen in other waterfront areas. It’s more spread out with lots of green between. One of the best “postcard cuteness” areas in the US.

We’ve just risen in lock E4. The gate for E5 is a little to the left.

The Erie is way prettier and more interesting than we imagined. Now I understand why the couple in the boat ahead of us last night will be spending this entire summer in the Erie.

Our final lock of the day was E7. A few miles beyond that was Schenectady Yacht Club where we are stopping tonight and tomorrow. Like our last two marinas, a pretty small place, but nice enough and right by a bridge.

We rented a car and the ladies are shopping at Target now. It seems like we’re out in the country at this marina, but the stores are just a short distance away from here.