Lunch in the pool, once part of the Acazar Hotel’s spa. Sue talks to the waiter by the stairs.

We are spending three nights at the St Augustine Municipal marina. We stayed here just one night on a mooring ball when we came north a few months back. We rode the water taxi in to eat at O.C. White’s and that was it. We’ve had more time as well as better (cooler) weather this time.

I talked about Charleston being small, but the old part of St Augustine is on a peninsula (or island depending on how you look at it) that is even smaller, about a mile north to south and a quarter mile the other way. Since we’re not looking for Walmarts this time, nearly everything that interests us is within four blocks of the marina. 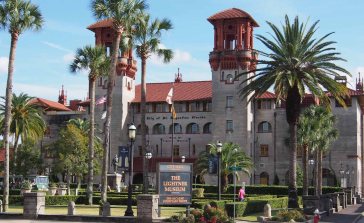 The most interesting building was the old Ponce de Leon hotel, which is now Flagler college. We took a tour and saw he hotel’s old grand dining room where once only the super rich ate. The students eat there now with Tiffany windows all around. A close second was the Lightner museum, which is housed in the old Alcazar hotel. It has quite a mix of exhibits from old typewriters, toasters and static electricity machines to silver and glassware that really interested Sue. We went back the next day for a performance of their old music boxes, some of which are as large as a piano. They also had a number of old Edison graphophones which replaced the music box. 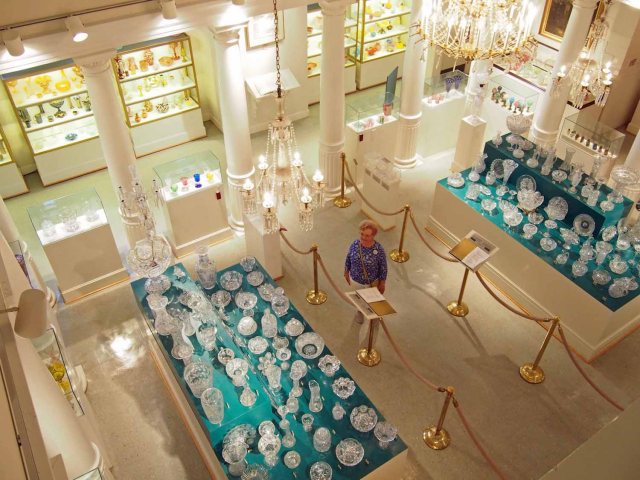 Sue liked the glassware exhibit the most. I liked the old machines.

We ate lunch twice in (not by) what was once the world’s largest indoor swimming pool in what was the Alcazar hotel health center. There is a long wide entry where the floor slopes from the shallow to the deeper part, then a large flat area where the tables are.

With those hotels and the very first Ripley’s believe it or not museum, which is in (you guessed it) yet another building which was an elegant old hotel, this has been a town for tourists for a long time. We saw only the outside of Ripleys, but did go inside the old Presbyterian church. Tonight we ate again at O.C. White’s. It’s in a building built in 1790.

If we needed a place to stay it would be disappointing that all the old elegant hotels are converted to colleges and museums. Good thing we have a boat.