Part of New Smyrna Beach from our bow.

We left St Augustine on Saturday at 7:00 and backed into a slip at New Smyrna Beach City Marina before 2 PM. Backing in required a 180 spin and lining up in a limited area that proved pretty difficult. I still get a bit disoriented with only the down directed camera to see in the back. We made it in after a couple of back and forths, but I’m going to have to work on that. Our next marina, at Melbourne, will require that as well as our destination marina at Lantana.

Even though I took it slower today, under “porpoise speed,” a couple of them followed us for awhile anyway. We noticed them because one kept jumping out and landing flat on his side with a big slap on the water. Scratching an itch?

We walked two blocks into town and found streets parked full of “classic” cars on display. We could not get to the end to see all of them. No really high end cars like Rolls, Bentley, Ferrari and such. Mostly American with a few British. There were a few from the 30’s, more from the 40’s, but most were 50’s and newer. The sure built them big back then. 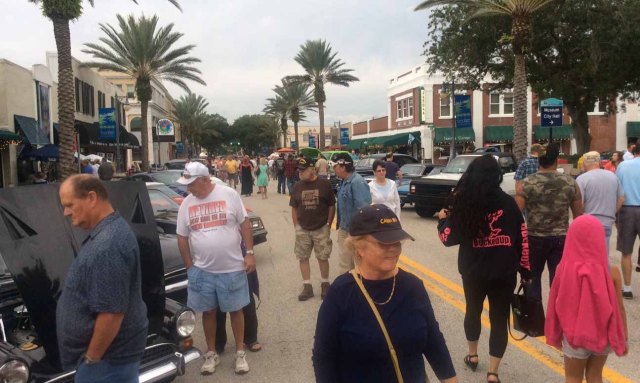 Sue found a car just like her family’s Ford when she was little.

Like many Florida coastal cities, this one is jammed against other cities on three sides and maybe there is another one on the Atlantic side of the ICW, so there were quite a few people in the small downtown area. After seeing the cars we turned into a Thai restaurant which proved better than many we’ve been to in the US.

Now that we’re running a boat we’re used to checking the weather more often, and also monitor a weather radar iPad app that gives us a better idea of what is coming. Rain was coming and would last all day the next day, so we spent today at the marina also.

It’s 5:30 now and we just got in from the bow, where the low sun was lighting up the town across the ICW. We’re parked bow out and can watch birds including pelicans an ibis are coming back to their small island just in front of us, as well as porpoises hunting in front of that.

This evening the birds all came back to this little island. Hunting oysters to the left.

Some rain tomorrow, although not as much. It does look like most of it is passing south of us. Hopefully we won’t go far enough to run into it.

One thought on “New Smyrna Beach”