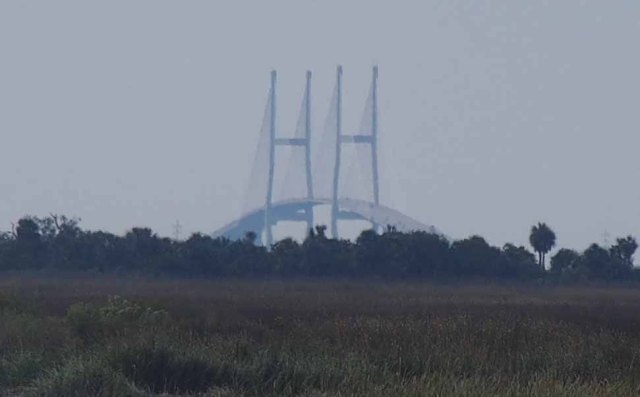 Georgia is flat. Brunswick bridge from 15-20 miles away. Curvature of the earth cuts off the bottom.

I write these posts nearer their time. When I later go through pictures and put the posts onto the computer I sometimes add stuff for an interesting picture. I just corrected a mistake where I added the bridge picture above to the previous post for Savannah when it belonged to this one. The cable stayed bridges in Savannah and Brunswick look the same to me. It was Georgia we looked through to see the bridge, not South Carolina as it would have been if we had been approaching the Savannah bridge, which is harder to see from the ICW.

We are back at Brunswick Landing Marina near the southern end of Georgia. We had a good trip down. High tide occurred early in the morning, just after we left the dock in Savannah, so passage through the Hells Gate area was easy. 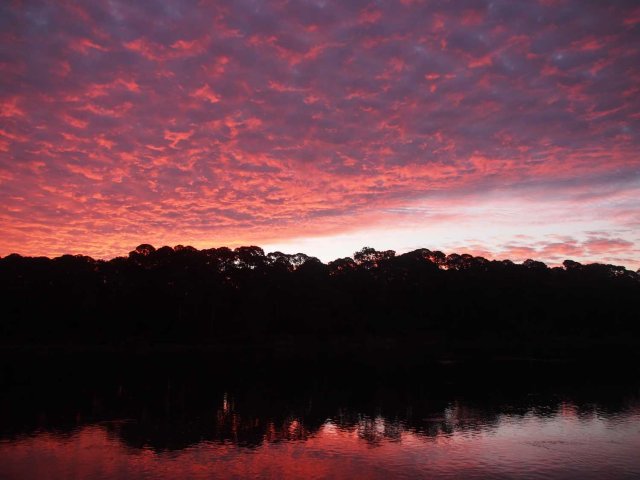 Sunrise as we left our Walberg Creek anchorage.

I mentioned before that Georgia is pretty remote between Savannah and Brunswick, so we again anchored in Walberg creek. Walberg is miles long and could probably hold 40 boats at anchor. Like last time there was only one other boat, a trawler like ours. An hour or so after we stopped Bruce from Aloha Friday kayaked over and came on board for a visit. Bruce and Mandy have a DeFever also, and are also members of the DeFever club as we are. We’ll see them again at the DeFever get together this March in Florida. 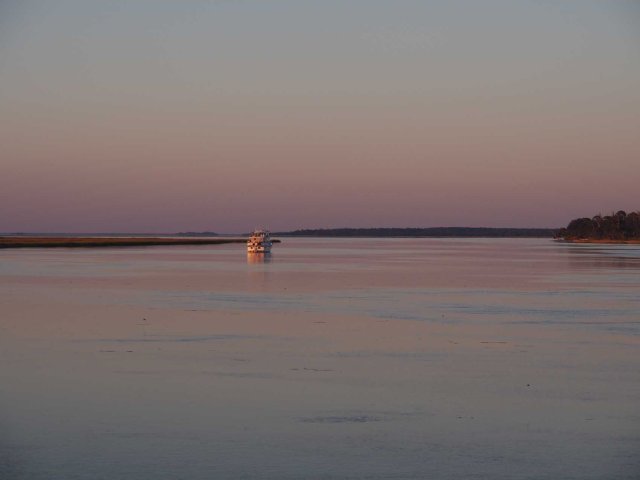 Aloha Friday at 3x zoom. Bruce stayed awhile, so he paddled against the current both ways.

Bruce and Mandy are not the first Aussies we have met that have come to America, bought a boat and are on a multi year trip. Like us they plan to do the loop next year. Their previous Australian boating backyard included Indonesia and Malaysia.

We left early, an hour before high tide, so we could cut a number of miles of our trip by leaving Walberg creek by its shallow south entrance. We got through Mud River, another ICW hazard, on well over half tide and reached Brunswick as low tide came on. Watching the sounder the last two days confirmed what I have heard from several people: Don’t travel the Georgia ICW on low tide. The tides vary more than 8 feet in Georgia and there were several areas where we would never have made it through at low tide. 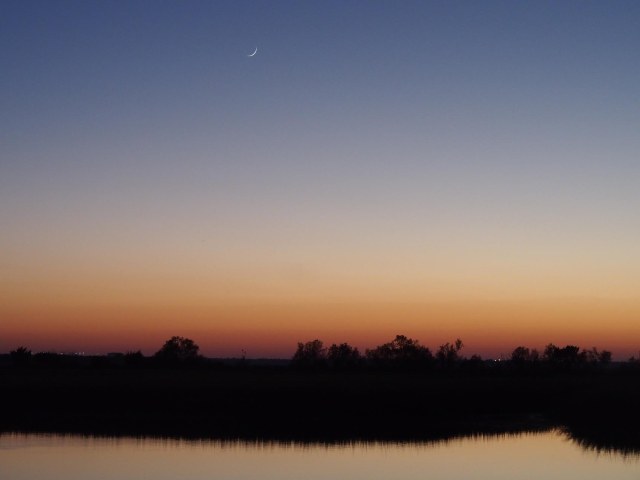 Sunset from our boat in Brunswick. That banding is not a computer artifact.

Weather was hot last time in Brunswick, but is really nice now. I guess Spring and Fall are the times to be here. We’ll pass through here next year in the spring, probably early May, as we start on the loop. The weather should be perfect.

6 thoughts on “Back in Brunswick”