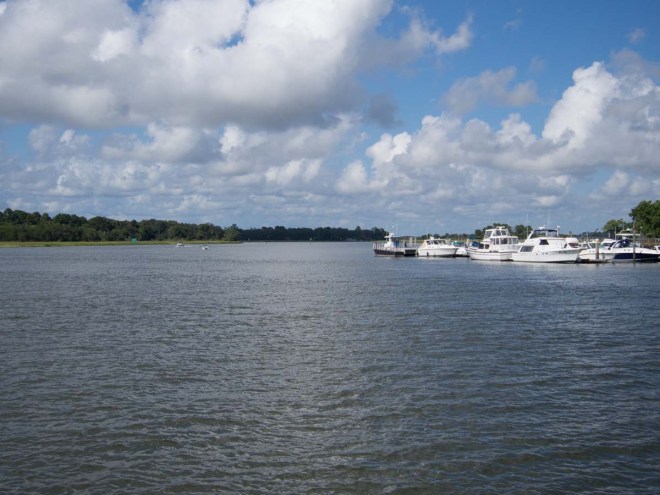 We arrived in Savannah July 17, a two day trip from Brunswick, GA. That was our first trip without a training captain. It was just Sue and I along with Ethan and Aaron, our 10 and 8 year old grandchildren who were visiting us.

Traveling at 10 knots or less in a boat like ours takes time. We don’t travel more than 8 hours in a day. We like to start at dawn, about 6:30, and travel to about 2:30. The weather in this part of the coastal US has been pretty hot lately, and we like to avoid the thunderstorms that form in the later afternoon. So we split the 110 mile trip (as the intracoastal winds along) from Brunswick into two days.

I always thought the east was more crowded than the west, but it is not crowded at all in the Georgia coastal area. There are no marinas, towns or much of anything else between the two cities, so we anchored out for one night on the way. We really liked anchoring. We were all by ourselves in the middle of nature. I’ll have to write a post just about anchoring later.

The picture above shows one reason we like traveling by boat. It’s taken off the back and shows boats at another marina across the Wilmington river, which is the name given to the part of the intracoastal we are on now. If we were traveling by motorhome we would be in a lot with other motorhomes at the edge of town, or maybe in a Walmart parking lot. Here the Savannah old town is a five minute drive away.

The trees ahead in the above picture are the edge of Bonaventure cemetery. Shortly after we docked I blundered into it when I put down the motorbike, took Ethan and looked for a safe place for a short ride. Later I learned it is in the US Historical Trust. Sue and I have been back twice since then. I have seen a lot of cemeteries around the world but I think this may be the most beautiful. The trees and Spanish moss overhang monuments and obelisks everywhere. This is one of the highlights of Savannah and we would not have noticed it if we were not right by it. 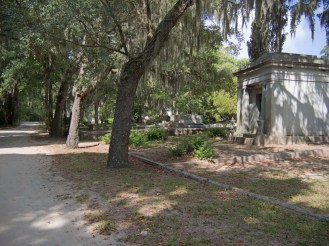 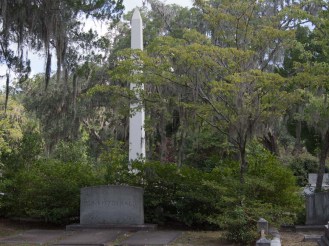 We’re having some work done to the boat at the Savannah marina, so we have had plenty of time to see Savannah. We especially like the old town section. The buildings on one side of River Street have been restored and hold a touristy collection of shops and restaurants. The river on the other side has a lot of traffic. Large container ships passed each other right in front of us. I don’t see how they had room to do that. We have seen more than six of the house museums, and the maritime museum is not to be missed if you like models of old ships like we do.

One thought on “Savannah”