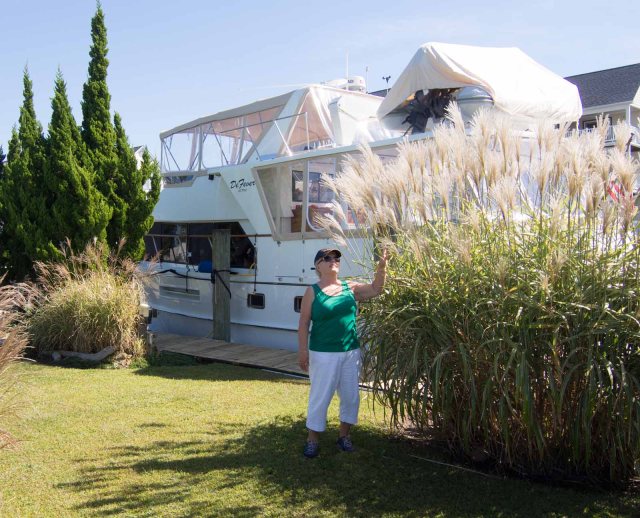 Sue at Belhaven marina. A few hundred feet of lawn extends to the left.

After our Midway Marina overnight at Coinjock we left at 7:30 and reached Belhaven Waterway marina in Belhaven NC where we are now. This is the smallest marina we have been in. We missed its entrance twice. First we turned into a marina belonging to some condominiums. This was not made for boats our size at all. I couldn’t get far into it but getting out was still difficult. They saw us in there and radioed that it was the very next entrance, and I still missed it! Finally I backed up, went in passing three boats and pulled along the seawall. Our boat has to be near the limit of what they can take in here.

If there ever was a small “tucked in” marina this has to be it. No docks, just some pilings along a seawall with a boardwalk at the edge. They can fit 4 or 5 boats along the wall, depending on their size. You need to back up to get back out. We like it so much we decided to stay 3 nights, or was I just putting off backing out of there?

Belhaven is a small town of about 1400. It has two stoplights. One is down town, only a block up from our marina. The other is up town, about 5 blocks west of us. There are 3 or 4 small chain stores (Walgreens, etc.) uptown and none downtown. All the other stores and restaurants are local.

What’s the news here? Across the lawn and a bit of water from our boat was a large modern brick building. It was the hospital for this area. Vidant corp. recently bought it and all the medical practices in town, closed the hospital and told everyone they could go to Washington NC 30 miles away for treatment. Can you guess who owns the hospital and the big medical stuff in Washington? The locals are working hard to reopen the hospital and apparently do have some means of pressuring the company. It will be interesting to see what happens in the future. Sometimes it’s hard to stay a conservative republican and believe everything I hear on Fox news, but I’ll keep trying.

Signs around town and breakfast at Gingerbread Bakery

The restaurants we’ve tried so far have been great. We even had breakfast out this morning for maybe the first time since we’ve been on the boat. Everyone, without exception, waves to us when walk down town or ride on our motorbike. Word travels fast and people we meet in the stores and restaurants know we’re from that boat in the marina.

It’s great to be back in the South. I guess Virginia technically is in the South, but it’s loaded with government and military people. We never heard any southern accent there, and those (non government and non military) we did talk to were from somewhere else. Not so here in Belhaven.

After coming in and washing down the boat we had pizza at Tavern at Jack’s Neck a half block up the street from our marina. Across the street from it is Spoon River Artworks & Market that is acknowledged by all to be the most upscale restaurant here. Food is great and prices are just average. We ate lunch there yesterday and had to come back for dinner. Our server turned out to own the restaurant as well as several old buildings across the street that she and her husband saved from the wrecking ball and will brace and refurbish. They both had big careers in Los Angeles but retired early and came back home. They did not lose their southern accents and are part of a few people getting the downtown back on track. Looks like they will make it.

Lunch today it is left overs from our previous restaurant meals here then it is off to the Belhaven Memorial Museum and the Police Museum next door. They tell us the first is a cross between the Smithsonian and Ripley’s Believe It or Not. This might be the small town we’ve liked the best so far.