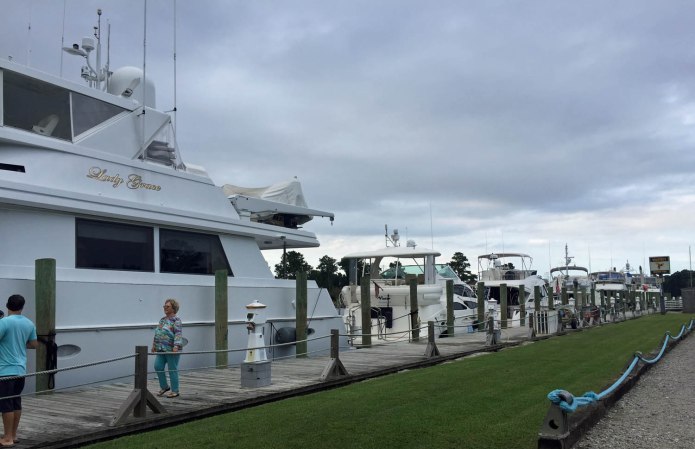 Sue walking to the restaurant along the Coinjock dock. Boats all the way.

We left Norfolk at 7:30 to continue south on the Elizabeth river. Our marina is right at the junction of the “Eastern Branch Elizabeth River Inlet”. Since I turned left to come into the marina, I turned left going out and went east on the branch instead of south on the main river. It seemed pretty much the same. Lots of ships up in dry dock, parked navy ships, service yards, cranes, containers, etc.

Outside the Coinjock restaurant. Regionally famous for steaks.

After two miles and several bridges two guys in a small service boat waved their arms and yelled at me “Are you sure you want to be here?”. That made me take a close look at the chart, turn around and proceed down the main river. I didn’t think about any of this when we were here in spring of last year because we were going northward and you would not make that mistake going that way.

I had allowed extra time to get to the Great Bridge on the hour at 10 and its preceding lock on the half hour at 9:30 and we still made it fine. We hit the following two swing bridges at their half hour opening times with no delay and so made it to Coinjock marina in NC around three.

The Pungo river – Alligator river canal on the way to Belhaven.

We tied up to a completely empty 1000’ dock at 3, but it was full by 6, including several boats considerably larger than ours and a 140 foot yacht as well. The big one turned around in the canal to dock and just barely had enough room. They did it quickly enough to indicate they must do it often. We had seen nothing but a couple of barge tows the entire way and had no clue where all these boats came from. It was Friday night, could all of them left from Norfolk after us to get there in time for dinner? Their steak house is very well known (we always each have a New York steak when there). Anyway, when we got up at 9 the next morning everyone had gone – we were the only ones left. Where did they come from and where did they go? It did appear the big one came from the north and was returning there, apparently just a day (and night) trip.

Belhaven from the water. We’re docking behind the condo building on the left.

Closeup of some homes appearing in the above picture.

We left at 10:30, crossed a calm Albemarle Sound and went on to Alligator marina with no incident and finally outstanding weather. We had great weather the next day when we went on to Belhaven marina as well. These last two years have had a lot of cloudy rainy weather. The years before it seemed we hit sunny days most of the time.