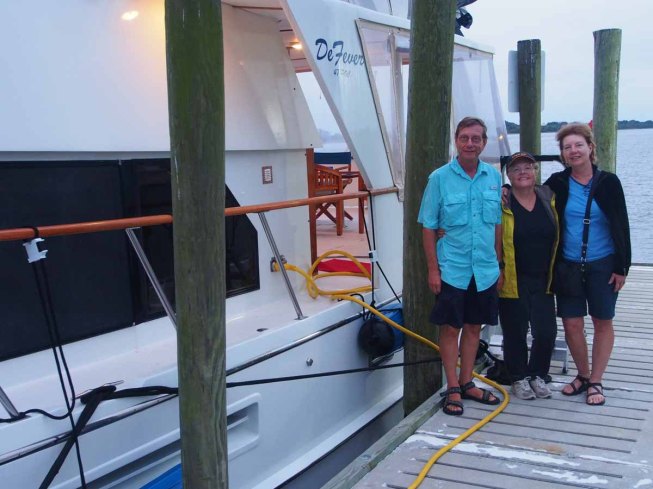 On the dock (pier?) at Swan Point boat yard. To my right is one of the fenders Paul quickly arranged.

It’s Sunday the 14th and we’re now at Swan Point marina in Sneads Ferry. The town was started by this guy named Snead who… You can probably guess the rest. Two large bridges have replaced the ferry now. Didn’t know what to make of the docks as we pulled up. They had the pilings outside the docks so our fenders would not work. The marina people didn’t answer my hail on channel 16, but finally appeared on the dock. We yelled at each other across the water until we figured out what we could do. With Paul’s help our fenders were hung differently and we’ll see in the morning if the pilings have hit and rubbed through anything.

It rained all day until the last hour of our travel today, but we made pretty good time. We got really lucky at 3 swing bridges we could not clear. Two opened every hour and one every half hour. We made it so we did not wait more than 5 minutes for any one. Learned something on the last one, Surf City swing bridge. Just as the bridge opened a southbound boat jumped on the radio and asked to go through first. If it was that important to him, why not? So I said OK without thinking. Paul made a short video at this time.

After this I’m going to study the situation at a bridge, anticipate such a request and decide in advance how to answer it. I should have noted that I had the current behind me and I was much closer to the bridge than he was. It is easier to control a boat against the current and I since learned our boat could assert a legal right of way. Also I should have waited a bit further from the bridge.  I ended up too close but off to the side as I allowed the other boat through. I had to gun the engines and do hard maneuvering to get to the center and keep control, which is frowned upon under a bridge. More current with a bit longer wait could have placed us in an unpleasant situation.

A boat is not like a car. You can’t just stop it and figure out a situation. You have to figure the situation out in advance and use the currents and winds along with your engines to be where you need to at the right time. I knew that already in theory, but it takes being in a few situations, hopefully without banging into something, to be able to but it into practice.

We were docked by 5 PM, kind of late for us, and by 5:30 the manager of the Riverview Cafe came by in a 4 door pickup took us on a wild ride to his restaurant. It had to be fast because he is a busy man. It’s still hard for me to understand how he could take the time (not very much, it really was a fast ride) for four more diners. Apparently the entire town eats there. Well, at least half of it was there, because the other half came in right after we were seated. I think some church function just let out. From a big church. After the meal we understood why everyone ate there and were, just as quickly and with as much interesting commentary about the area, returned to the marina. He absolutely refused any tip for the transportation. We’ll do this again next time we come through. And wear our seat belts.

Swan Point is somewhat down at the heels. A woman and her mother bought the abandoned boat yard 2 years ago and are making a go of it. I guess you could say it has a lot of character. Charleston City Marina was interesting and its opposite turns out interesting as well. Boats in all conditions, except those abounding at Charleston City, are up in the yard being repaired and rebuilt. There are a number of live aboards there that look unable leave the marina, which is a good thing since some docks might sink if the boat bracing them were to leave. The place was so funky we loved it. We travel to see different things, and this was different. Sorry there are no pictures. Due to our initial shock we did not bring cameras when we left the boat and it was too dark when we came back.