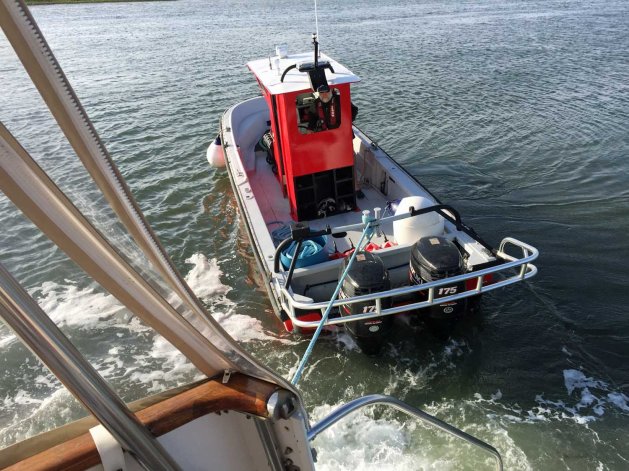 Our first towboat experience. His prop wash is clearing mud from underneath us.

We made our goal of Dudley’s Marina in Cedar Point NC, but not until 6:30 PM today. We started at 6:30 this morning so that’s 12 hours underway. We had three big delays. First we ran aground about 3 miles north of our starting point. Active Captain said to get WAY over to the red side to safely pass a shoal. I got over too soon. As we were stuck we watched locals still in the middle of the channel where we were to the west side. They got up to the hazard area and veered sharply almost to the dock ends of the west side, went about 100 feet and then veered sharply back to the center of the channel.

We called BoatUS. It’s like triple A on the water and we’re a member. A small, at least compared to us, tow boat came out, hooked to our boat and pulled us toward the center of the channel. That little boat just pulling would never get us off, but its prop wash blew away much of the mud and sand we were in, freeing us up enough to pull us off.

We were fine after that and continued on, but it took three hours for him to get to us and do his thing! We have never had a significant grounding until two days ago, and now today. Hopefully this will not become a trend.

A little later we were 10 miles out from the Surf City swing bridge which opens every hour. It was a few minutes after 11, so with a current against us we would be about five minutes late for the 12:00 opening. I slowed way down and we made the 1:00 opening. Another hour. This is not the first trouble I’ve had with this bridge! These delays can happen to us, but usually we can time it so our average wait for these kind of bridges is 15 minutes or less.

Finally, when I passed another boat going the same way he commented that I might not really want to go very fast because the marines had live fire exercises at Camp Lejeune 15 miles ahead and had shut down the ICW for a 10 mile stretch past the base. This was at 1:30 and the ICW would not open until 5 PM! Our charts have the phone number of the fire control officer so I called him for details. Live fire will commence again very early tomorrow morning, so stopping just short of the base for the night would not work

We slowed to 4 mph, which got us to the base boundary at 5 when it reopened. As we neared the base it was apparent the guns being fired were large ones. I could feel the deck shake from some of them.

Today was the only day we’ve ever had where delays totaled more than an hour. I don’t think we’ve had more than 3 travel days where we did get an hours worth. So I don’t see this sort of thing happening much.

Two more travel days and we’ll be in Washington.