One of the lions in the Boston Public Library stairwell. Some of the murals the “four great expressions of the human mind” (it takes 8 of them) in the background. Remember, you can click on any picture to magnify.

Our first day in Boston started in Trinity Church, where we learned a lot about stained glass window art in early America and saw windows from five different artists working just after the civil war.  One was John La Farge who was a major influence on Tiffany. 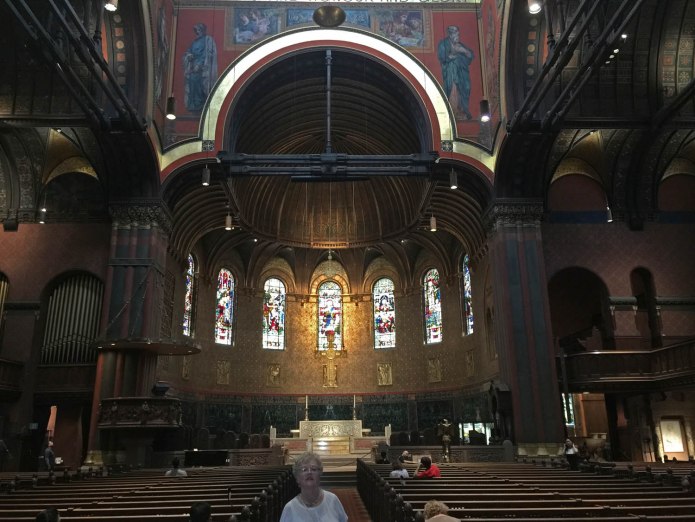 Next was the public library with its famous reading room and murals. We saw the ones illustrating the four great expressions of the human mind, as interpreted in a classical Greek setting, in the main stair hall. The ones about religion in the Sargent gallery caused a bit of a stir back in the day. Finally was the quest for the grail in the Abbey room. I did snap pictures of these, but you can see them better on the internet. My favorite room was the quest for the grail which is also here. We both really enjoyed the church and library.

Public library stairhall to the second floor, viewed just after coming in from the street. 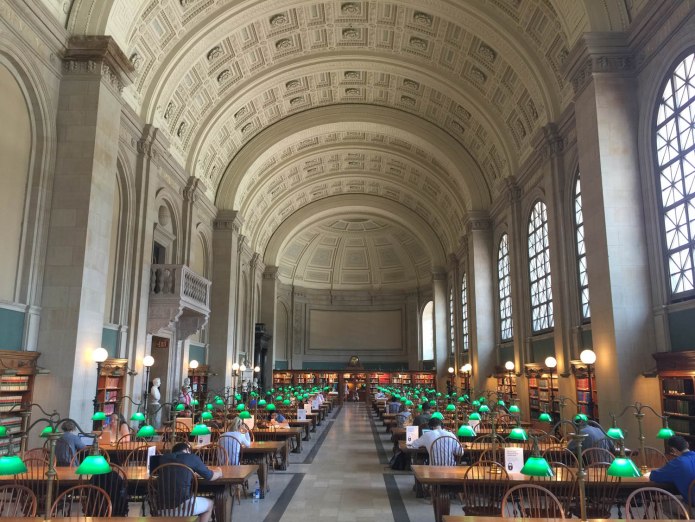 The great reading room up on the second floor. Can you see Sue midway back, clear to the left?

I looked around in the Old South Church while Sue looked in some of the nearby shops, then we both walked to the Boston Gardens and Commons and spent some time there before calling hopping an Uber back to the hotel. 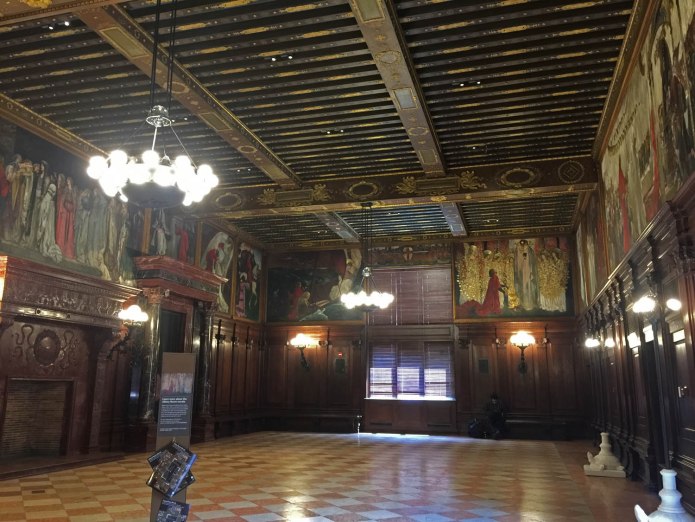 Abbey room, named after the painter of the murals. The Sir Galahad kneels before the golden tree in the one viewed straight on.

Our second day was spent in the huge Museum of Fine Arts (MFA), which was open 10 to 10 on Wednesday. There was certainly plenty to see, and our ticket was good for a second day. Our third day was at the Isabella Stewart Gardiner Museum. Isabella was a collector and set out to make her own museum in a house she designed like a Venice palace. Sue really liked it, while her collection did not do much for me. The fourth day was back to the MFA, again open from 10 to 10, where we used up most of that time. I think we’ve seen most of what we were interested in there, but will be ready for another visit by the time we get around to Boston again.

Could it have been like this? Moses, to left, calling down the plague of hail and fire on Pharaoh, to the right. I fear the buildings were really not that grand. The storm, on the other hand…

The MFA had a number of pictures about myths, old stories and events from history. Many of these things I’ve known about most of my life and imagined how they might appear. It’s really interesting to see how someone else from another place and time and often with a better imagination saw them.

In a more lighthearted vein, two paintings illustrated the dangers of travel. The other had a family in a cart crossing a raging stream on a high, collapsing bridge.

The last day in Boston, Saturday, was for house museums and old Boston history. We woke up to rain and a prediction of more all day. By the time we got out of the Uber car at the Otis house, our first one, it was really coming down. We got out at what we thought was the entrance, but it turned out to be over along the side near the back. We got a lot more rain than we bargained for. The Otis tour was just OK, and a call to the next house told us that visitors wait outside until the tour starts, so we called off further house tours.

The largest of four restaurants in the MFA. Tree to right made all from glass.

We gave up, asked where the big bad mall, the one with an Apple store (and enclosed of course), was located and off we went. Sue shopped about a little, and I saw a handy new electronic device for my car. Checking on the internet it is still not as easy to install and use as a toaster, but when that day comes I’ll get one. Sue found a place to get her nails done, so at least we accomplished something.

One thought on “Boston”