The “pond”, looking in our direction of travel, as we readied to leave Merrickville.

Since it was an hour to the first lock past Merrickville we started out for Smiths falls at 8 AM. The weather was not great, but not really cold either. Everyone from upstate New York to here has commented how this summer has been colder and more rainy than usual. We realize now how fortunate we were doing the loop two years ago, when great weather was the norm. Still, we’ve had plenty of great travel days to offset the cloudy ones, and only 3 or 4 rainy travel days total.

Second to the last lock before Smiths Falls.

The forecast now is not the greatest, and with kindergarten waiting for Troy in Florida we are now thinking of running across Ontario and back to our Winter Harbor storage place once we have seen Kingston at the end of the canal.

With 28 feet of lift, this is the deepest lock in the Rideau and needs hydraulics for its large gates. 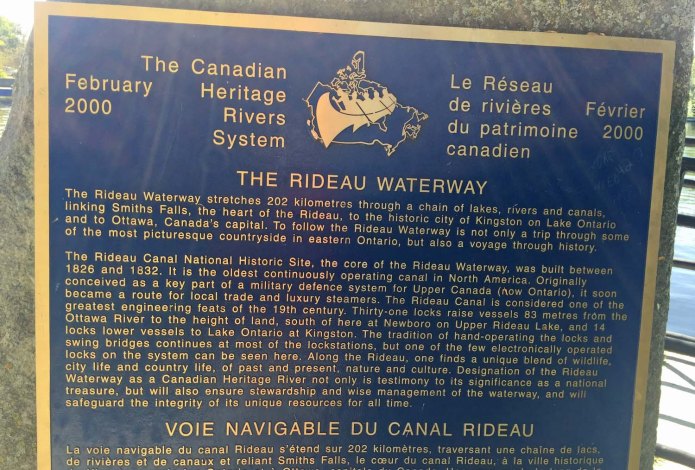 Today we went through 4 locks with the last one hydraulically operated and raising us 28 feet, the deepest lock in the system. After that lock we rounded the left lock wall and tied up on it’s other side, parking between it and the original 3 chamber flight lock it replaced in 1973. Canada had just started a modernization program when they realized the historic status of the old hand operated system and stopped it in the early 70’s. Operating lock gates, valves and swing bridges by hand also gives summer jobs to a lot of Canadian college kids.

The Rideau Canal Museum was the first thing we hit in town with exhibits and models showing how the locks work as well as the history. The Rideau system is older than the Trent Severn and Erie. The locks are all shorter, the shortest we’ve been in, as narrow as anything we’ve seen and with a few exceptions like the lock here, most have 11 feet or less of lift.

So many homes are small and very compact and efficient to heat.

Smiths Falls is the largest town between Ottawa and Kingston in the St Laurence at the other end of the canal, but still is a pretty small town. Sue and Nancy did some shopping at various stores which were less touristy and more aimed at locals than in Merrickville.

They also had a steam engine, several cabooses, a dentist’s car, and a boxcar all of which we toured.

Saturday morning we went to a small railroad museum a short walk across town. The homes along the way were small square brick two story houses, the most efficient shape to keep heated in the winter. We didn’t see anything grand, just small and old.

Nancy left us in Smiths Falls, taking a taxi back to Ottawa airport, which for all our winding about on the canal, was only an hour away by car.

One thought on “Smiths Falls”