The water was calm all day, but especially when we started out. Sun and great weather.

The channel often got narrow, as it is doing here. Sometimes confusing – but no time for pictures of that.

Rideau locks don’t open until 9, but the first one for us was two hours south of Hurst Marina. Merrickville is said to be the best town to stop at along the Rideau, so we left at 7 to get there early to find tie up space in the “pool” on the other side of the Merrickville triple flight lock. Merrickville is one of the harder places to find space, but there turned out to be plenty because we were traveling so late in the season.

As we passed the silos in the above picture on our left, this was on our right.

Taking it slow in another narrow channel. Shallow and marshy to the left.

When we got to the last triple flight lock at Merrickville boats were already starting to lock up in the lowest lock. The lockmaster told me on the phone that when those were finished several boats were waiting to lock down. He would get to us in about an hour. Longest wait by far we’ve had on the Rideau. Usually the gate is open or they see us coming and open just as we approach.

This bridge is just after passing through a hand operated lock. A guy behind it to the right is pushing it open. 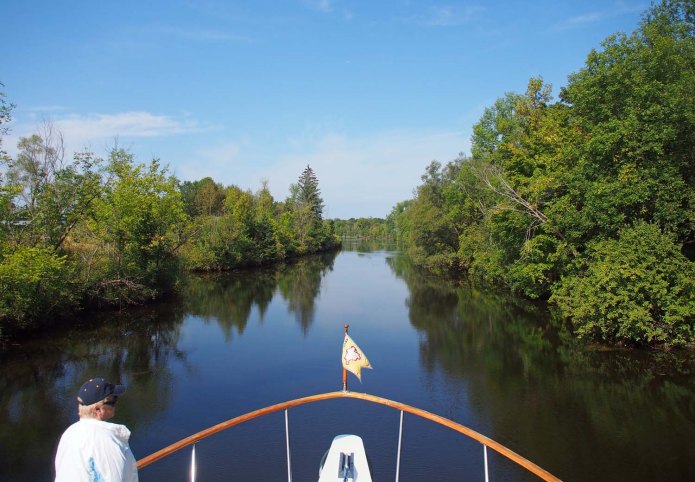 More slow passage before the long wait at the last three flight locks.

There were no cleats at the waiting dock, only loops that appeared too small for our lines, so we floated in a small area while we waited. The worst thing about easing into mud is sucking it into various cooling intakes. We did that to our aircon in Philadelphia and had to get it flushed out. This time the worst was vast mud clouds kicked up when our tail and props got a little close.

One side of the main street. No single truly outstanding building, but taken together it was very nice.

While more than half the canal is before us, today may have been the high point. As often as not we were in very narrow winding channels close to the banks on each side. Other times our channel would branch and within 100 feet our chosen channel would branch again, and then again. I had the chart right in front of me but still had to slow down and convince myself that I had chosen the right way. As close to an Indian threading a birch bark canoe through a small stream in the northern wilds of Canada as we could get.

We crossed the lock gate to go into town. We’re parked to the right. Downtown is to the left.

Merrickville was a great stop with everything a block or so from the boat. There was a park on a small island extending away from us on the other side of the causeway. It had stone building ruins and a small museum. Troy was especially taken by an old steel water turbine he could push around like a small playground merry-go-round. This turned a vertical shaft which, through 4 other shafts and various large pulleys and leather belts turned a wooden spindle on a old lathe. He’s now on the boat trying to draw pictures of all that. 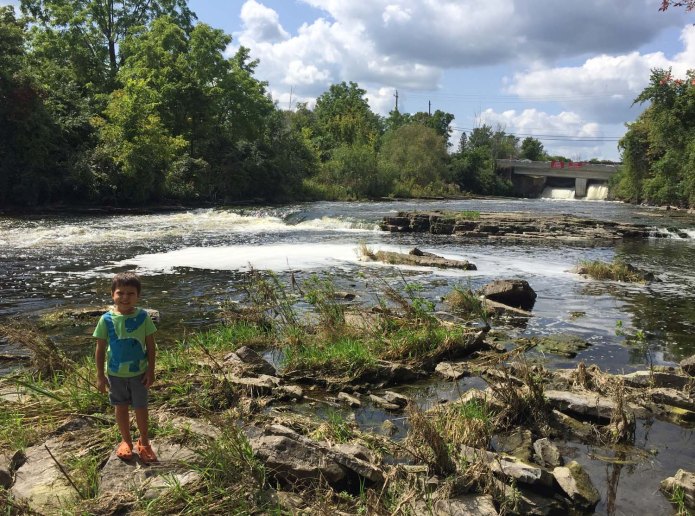 Out on the rocks at the far end of the small island park. Town and locks on the left, our boat at the upper right edge of this picture just through the trees.

We spent an extra day, found a Chinese restaurant with an entirely new take on hot and sour won ton soup (Nathan and I agree it was great). The women spent a lot of time shopping about the town and we all visited a better than average antique store with a lot of old toys from our childhood and before.

One thought on “Merrickville”