From our Ottawa parking spot, looking where we’ll be going. Not many boats this time of year. In July both sides are packed.

We pulled away from the wall about 8:30 just glided at reduced speed through downtown Ottawa and into its suburbs. We passed through downtown and then park after park along with mid to upscale suburbs. It was an outstanding travel day, sunny but comfortable. Most of the canal has a speed limit of 8 mph or less and we traveled 20 miles total so there was no hurry.

The canal gets wide with bike paths on each side in the city. 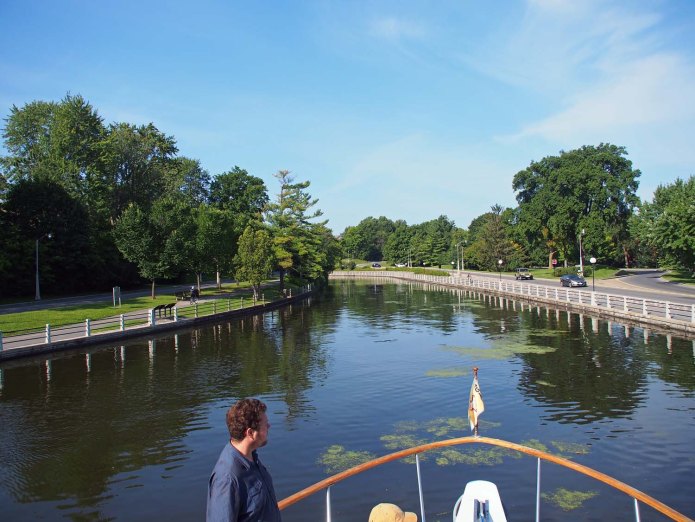 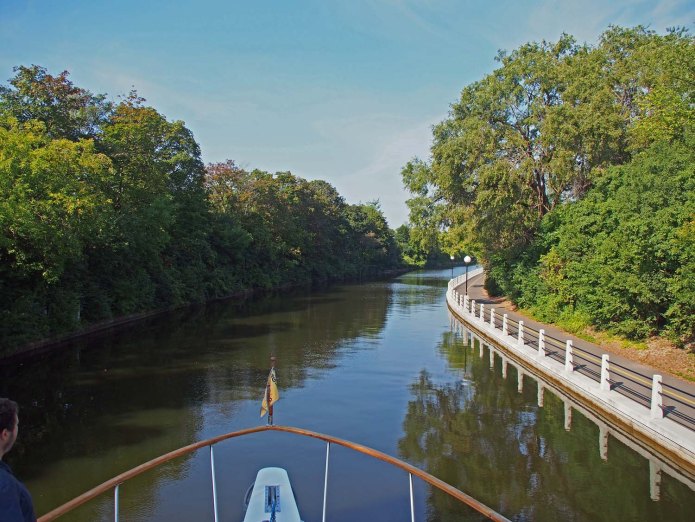 Forest barrier on the left with homes behind.

Ottawa homes along the way.

In 15 minutes we reached the Pretoria Avenue lift bridge. You can’t call the bridges and locks here on the radio but they do supply phone numbers. How did the navigators of old ply these waters without cell phones? Anyway, the bridge master said there was a fire somewhere. Several emergency vehicles had already crossed the bridge and he was not sure if more were coming. After half an hour he got the all clear. It looked so much like a drawbridge that I didn’t even notice it had lifted very slowly until the boat waiting on the other side came through first. Since there are many 22’ fixed bridges on the Rideau it had to lift only 12 feet.

The first two locks were well within the city and the third was at its southern edge.

That swing bridge looks like a foot bridge but cars, no trucks, drive across it one at a time.

Toward the end of our trip, just outside of Ottawa we pass the only two boats of the day, the first a very small commercial cruise boat.

We landed at Hurst Marina to the south where we are still in the Ottawa city limits. Scenery could not have been better.

Tomorrow we head for Merrickville said by many to be the quaintest or cutest village on the entire Rideau canal.