View back as we left Akwesasne Mohawk Reservation, NY.

Last night I read up on the Canadian locks and bridges we met today. The basic idea was the Seaway was for commercial traffic, but private boaters would be tolerated – just barely. If there is a lot of commercial traffic waits at a bridge or lock can be 5 hours or more. They say they’ll try to get you through the same day. That’s a good thing since there’s a $5000 fine for staying overnight at the waiting docks at each end of the locks.

Morning sun reflects off the first big boat of the day.

Our experience today started pretty well. We went 50 miles to find 5 boats waiting at the first lift bridge. We waited while our number grew to 7 and the bridge went up. The next bridge and following Beauharnois flight (double) lock were within a few miles of the first bridge and worked with it, opening soon after the slowest boat in the group reached it. After 20 more miles the next lock, Cote Ste. Catherine, opened within a half hour, then it was 8 miles to the St Lambert Lock, 2 miles from Montreal.

St Lambert turned out to have lift bridges at each end over the lock gates. At our end the bridge was a double track train bridge stacked over a road bridge. At the other was another double track train bridge. The lock opened after 20 minutes to let 3 boats out but its green light never came on and it lowered its bridges and closed its gates without letting in any of the 9 waiting boats.

Waited a half hour here. Once in we went through the next bridge & double (flight) lock together.

Four trains passed over the bridge at our end. By the time that was done my AIS screen showed a large tanker coming up the river past Montreal toward the lock. Sure enough, they dumped our water and locked the big boat up while a few more trains passed. We had all waited over 2 hours when the lock opened. After dropping 32 feet we could all clear the lowered rail bridge at the other end. Good thing because trains were crossing it while we were in the lock and coming out of it. The busiest lock we’ve ever seen. Altogether we dropped 148 feet today.

Trains delayed us more than anything else. Cars travel below the trains at this end. Lift bridge in back is up for the big boat.

The last two miles to our marina went right past downtown and was against a current that reached 8 mph, which is a lot for a boat that normally goes 10. I rarely use twice as much diesel to go 12 mph instead of 10, but did today to go 4 mph instead of 2. Fortunately the marina had a wide entrance and no current at all inside. 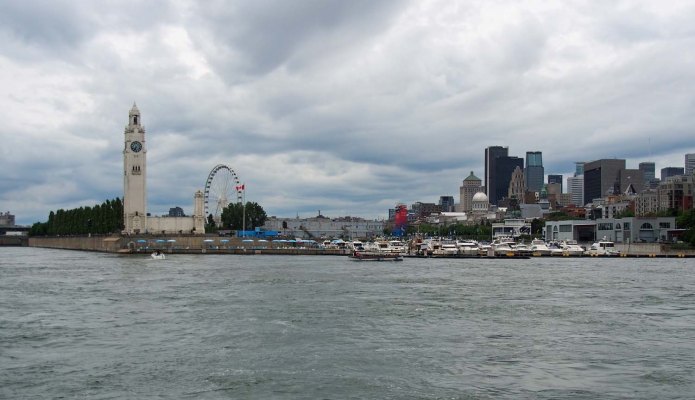 Entrance to our marina is toward the right. 8 mph current here, but once in it’s calm. Now we are downtown in the Old Port area.

When we leave to go up the river to Ottawa we have to go through the St Lambert lock the other way. I’m not looking forward to that.