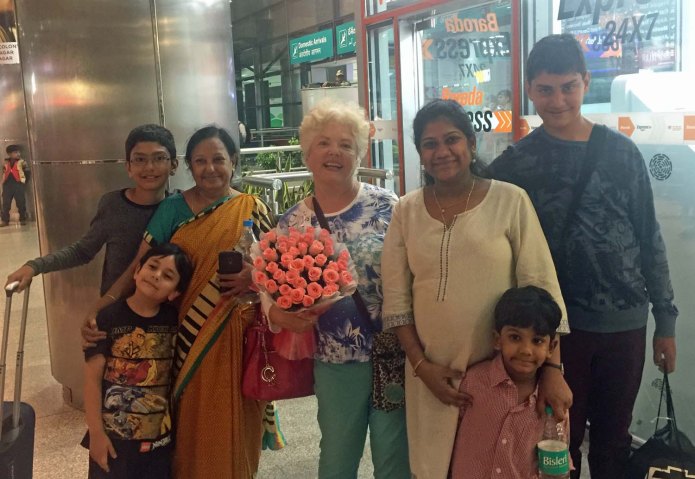 Harini’s sister and mother with Sue, the boys brother Derrick and cousin Nistial.

Things were a mess in India. The people we trusted there bribed some government officials to create a legal situation where it was more difficult for us to monitor them. Pretty devious and had us fooled for almost a year.

Our room was through the detector and on to the left. A government official was using this room.

Once Sue appeared in the slums again things changed pretty quickly. The rule still held: no one stands up to Sue Ma’am in the Indian slums. She, with help from our Indian family and attorney, came within a day of putting a few people into prison, but at a cost of interrupting the school year for over 600 kids. It got a bit ugly but we instead pushed through a quick settlement and are getting the school back on track with as little interruption as possible. Not at all just, but the kids needed schooling more.

Sue’s first meeting with her teachers in a few years. Harini at the right.

We arrived back in NYC the morning of Wednesday July 12. The kids had a flight back home on Friday morning, so we dropped our bags at our Brooklyn hotel and took an Uber into Times Square. We returned the next day to breakfast at Juniors, the top of Rockefeller Center, Grand Central Station and the afternoon at the Met.

Bethesda Fountain at the north end of the Mall in Central Park.

View of the Lake on our way to the west edge of the park.

After the kids left Sue and I moved to a hotel in midtown Manhattan for two more nights. We spent Saturday morning in Central Park and did some shopping in to areas of the city. Sue doesn’t buy much anymore, but still likes to shop a bit, and claims nothing beats the prices and selection in the big city. We also ate at some great restaurants. We both agree on one thing: the deep dish “Numero Uno” pizza at Uno’s restaurant is the best. We’ve had it in the Baltimore Inner Harbor and across the street from the NYC Museum of Natural History and nothing else comes close.

One thought on “Back from India”