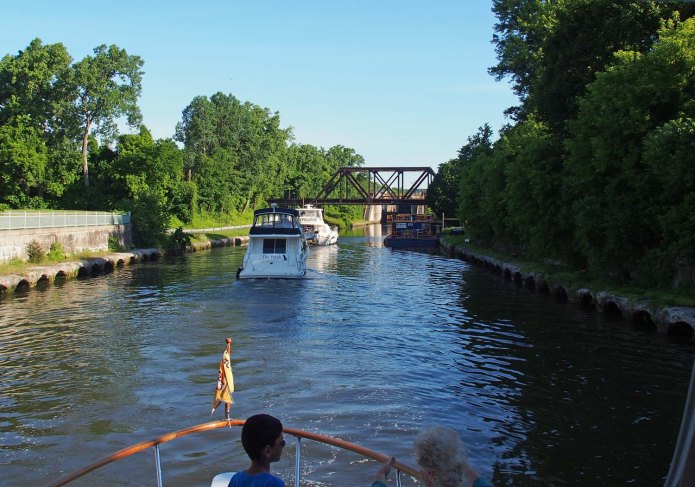 Just coming out of E2 with the E3 gate just over the docked workboat.

We left Waterford right into lock E2. Both front and rear thrusters worked fine as we pushed away from the dock and flipped 180 to point to the lock. Once in position along the lock I pushed the rear toward the lock wall and nothing happened. The rear thruster failed which put me back to opposing the engines to move the rear of the boat.

Out of E3 with E4 just showing around the corner.

This was the first time with our new crew of Ethan and Aaron. That, along with me trying to figure out the thruster, not having been in these type of locks for 2 years and trying to work with those stupid ropes that hang down from on high made things extra exciting for a little while. We hit our stride quickly, however. The rear thruster is needed most in when I really want a powerful shove. Other means turned out to work OK in the lock, but that needs fixed.

Guard gate between the 5 gates and E7.

Five locks, E2 – E6, are each just a few hundred feet apart. They came in rapid succession as we lifted out of the Hudson River valley. They operate together, so as we left one lock, the lower gates of the next were open and ready for us. After lock 6 we had an hour to enjoy the scenery, which on the Erie is world class, before hitting lock 7, our last of the day.

E7 was a 27 foot lift with several busloads of school children packing the railing up on the other side. The “lock full” of boats, about 6, that started out from Waterford were still together after the 10 miles between E6 and E7 so all went in together again. I was 2nd from the front and had get close to the front boat to leave room for the boat behind.

As we rose the kids got quite a show as the large boat in front broke loose, swung out and hit both sides of the lock at the same time. I think they just had those ropes down from the top to hang onto, so it’s hard to blame the boat’s crew. When coming down from that high those ropes just pull the boat upward, not into the lock wall. Back in our position there was a strong vertical rail that our midship line could slide up as it held us into the wall.

The boys are learning. Using the right method, in lock E7 Aaron held our boat to the wall entirely by himself.

Another 20 minutes from E7 we stopped at Schenectady Yacht Club. It’s a small marina and the only place we fit was at the far end of the fuel dock. There are no marinas close to downtown. We all walked a half mile was Stewarts, a chain of small stores selling their own brand of foods, especially ice cream.