We went to an unexpected church service here.

We’re still in the Inner Harbor at the Baltimore City Dock for our 2nd time in Baltimore. Someone did come by yesterday to collect the docking fee. We’ll be here at least 7 days, maybe more. 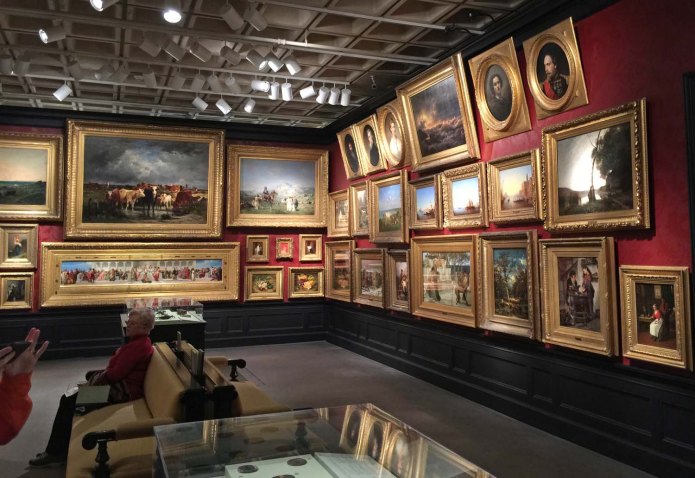 A room at the Walters Museum.

The Walters Art Museum where we spent Friday was top dog. We ended up spending all day Saturday there as well. Sunday after church we spent at the Baltimore Museum of Art. We weren’t too sure about going there since what we could find about it touted their impressionist and modern art. Turns out they had a lot of 17th and 18th century European and American art as well, and we had plenty to see.

Faberge eggs at the Walters Museum.

Another thing that turned out good was lunch. Museum restaurants are usually very good and among our favorites. We got there after church all ready for lunch and forgot it was Mothers Day! Of course they mentioned it at church but we did not connect the dots. No way could we reserve a table and the museum is on the John Hopkins University campus, so no other places to eat nearby either. They still had two places (and only two places) left at the bar with the same menu however, so we were saved. As expected, lunch was great. In fact, the seating was great. The two places left were together at the corner of the bar, so we halfway faced each other as we often do when we have a table, just sitting a bit higher.

Tiffany window of the Baptism of Christ at the Baltimore Museum of Art.

Sunday morning we grabbed and Uber to the First and Franklin Presbyterian Church. Its current building, built in 1859, is on Madison street. It was started in 1761 and had another location from which it got its name.

The choir sang at the back and at times moved to the side balconies.

The service was very good and the pastor did fine, but what blew us away was the music. They have a very good pipe organ and someone who really knows how to play it. The choir was phenomenal. The last time I heard one that good was 50 years ago at compline at St Mark’s Cathedral in Seattle. Sue agrees it was not just good but outstanding. They sang above the congregation, usually in the back by the organ but sometimes from the connected side balconies. A formal service even by Presbyterian standards, but hey, do formal that well and we’ll be back.

Ran into this on the way to the restroom. Mercury pendulum. Wonder how old it is.

The congregation was not large considering the size of their building, but was a good mix of young and old. We talked with several people after the service when every one met for berries and cream. They thought they had a good choir, but didn’t seem to see anything special about it. Puzzling to us. Maybe we’ll learn more when we can get back there.

Today, Monday, we spent at the Baltimore National Aquarium. As good as any aquarium we have seen. Sue was not able to see that when I went with Sharon and Paul last year.

It finally started to warm up Sunday and now is back to fine weather today. We still have places to see. Will 7 days be enough?