Leaving our marina at 7 AM.

First light is now 6:30. The fog was so thick we waited to start until 7 when everything was white with about 300 foot visibility. On the way out the moored sailboats appeared on the radar well before we could see them, and radar delineated docks and river banks matched up well with the charts, so all the instruments we needed appeared to be working well.

We knew they were out there, but didn’t see them until they got close.

We quietly glided along at 6 mph raised 1 mph by a following current. The wind was with us so it was dead calm on the boat. The ICW at Georgetown is a natural inlet/river about 1500 feet wide, so we could not see the banks except on the radar. It was a very peaceful and enjoyable voyage now that we’re more used to this sort of thing. I did have to slow down as we approached a bridge so I could make sure where the pass through span was.

This area is more remote than most, so there were only a few small fishing boats that the radar easily picked up. We didn’t see them except for two who passed close enough to our side. We sounded the horn at a half mile so they knew we were around, and would give them another toot only if it they would have come close to our path forward. 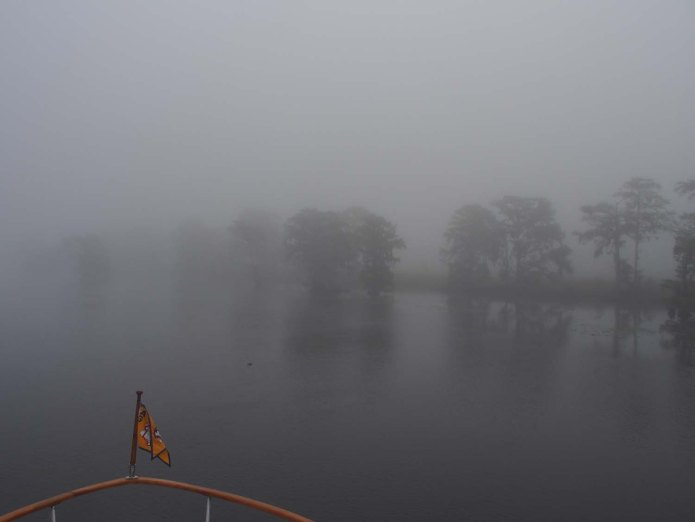 After an hour and a half both the ICW and the fog thinned so we could see the banks.

The fog started to thin around 8:30. By then the ICW averaged 800 feet across and we could just make out trees on its banks. Both chart and radar warned us about a couple of small marinas whose docks stuck several 100 feet out from the banks, and the day markers and buoys on the chart matched with what the radar showed. By 9 it was pretty hazy but we no longer depended on the radar and by 10 we could speed up and had a clear but overcast day. By noon it was a nice sunny day with a cool breeze.

Passing through a small NC town. Note the sunk fishing boat in the picture center.

As we entered North Carolina we saw more development along the ICW and passed larger populated areas, like Myrtle Beach. I probably would not go out in a thick fog in areas like that.

3 thoughts on “A Fine Foggy Morning”