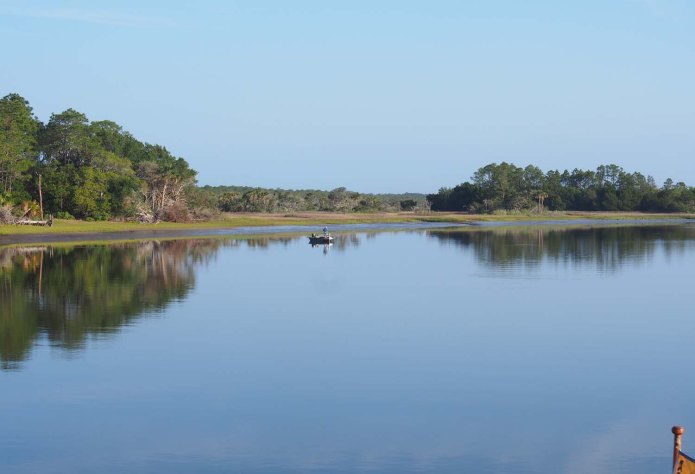 We brake for fisherpersons. A two foot wake coming at him while standing could ruin his day.

The waves and weather looked good the night before we left St Augustine, so we planned to go north on the open Atlantic. The coasts for Georgia, South Carolina and the south coast of North Carolina have several usable inlets, so we would normally not be more than 25 miles from a way back in if we needed it.

More waterfront development as we near Jacksonville. Private docks along the ICW.

St Augustine has an inlet, and if we knew the local waterways and the tides were with us we could have used that. It was safer to go 50 miles north on the ICW to the St John inlet, the large ship channel into Jacksonville. Morningstar marina is on the St John river a few miles before the inlet and had decent fuel prices. We got there around 11:30, tanked up and were out of the inlet just a few minutes after noon.

The view ahead. A good indication we’re getting near the shipping channel.

On the way the pilot of a large tanker called me on the radio. He was on my tail and I needed to get out of the way. I should have remembered to have the back camera on so that sort of thing does not take me by surprise. We go 10 mph but large ships can go up to 20, although they usually keep it down to 15 mph or less in harbors and channels. They can quickly overtake us. Anyway we quickly moved over to the side of the channel where we probably should have been in the first place. 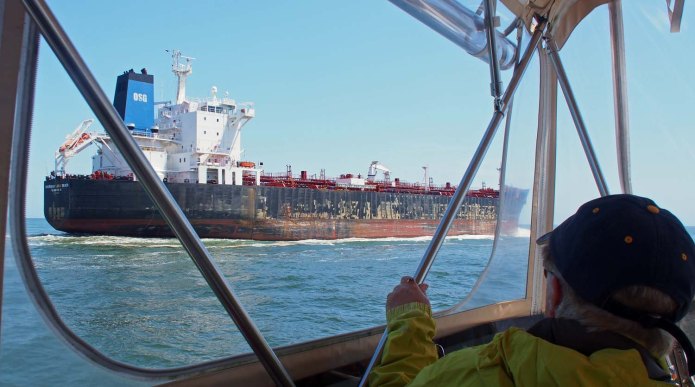 We need to stay out of the center. This is the boat that came up behind us.

I wanted to go 400 miles to Beaufort NC. That would take 40 hours, getting us there at 8 in the morning after two nights on the water. Two nights would be pretty tiring and the predicted wave heights were not good up there anyway. We decided on one overnight, 30 hours, to Cape Fear NC. We’d reach the inlet at 6 PM and there was a marina just a mile into the inlet that would be easy to get into in the dark if necessary. 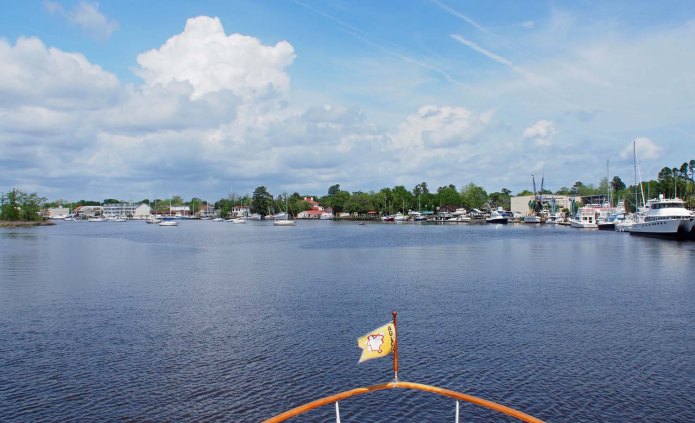 Coming into the Georgetown harbor. Keep right of the moored sailboats and dock just before the 3 story condo to the left.

The trip turned out OK, but it did get rougher than the predicted 2 foot waves for a few early morning hours. The waves had to be 4 feet at least; many were breaking over the bow which is 6 feet. That was during Sue’s watch. After I took over at 3 AM conditions gradually improved. Still, I decided to cut it short and go to the Georgetown SC inlet for a total of 24 hours of travel, so we entered the inlet at noon the next day. The biggest problem when pitching from larger waves is that it requires a bit of arm strength to get up and move around the boat without falling. Not the easiest thing for Sue but she was a lot better with it than I expected.

Georgetown is 18 miles from the inlet mouth, but most of that is to the north which was the way we wanted to go. We can get to Cape Fear in just one more day of travel on the ICW.

Looking back from our marina in the evening.

We’ve gone from St Augustine to Georgetown both ways several times on the ICW and it always required 7 travel days. Our outside adventure took two days and got us in in plenty of time to go out into town and still get a little extra sleep to make up for last night.