Four sailboats on the barge and two towed alongside. We assumed they were all taken off the ICW bank by the crane.

Yesterday morning it was 63° outside at 9:30 which reminded us that we really needed to be south. We couldn’t get moving until the half tide rising at 11:30 because the inlet to our Amelia Island marina had been silted in over the years and then topped off by the hurricane. The dock master went out in a small boat with a sounder and checked the way just before us. He had us keep to the left out at the channel entrance and we squeaked by.

Boat houses along the ICW north of St Augustine. The other side was lined with them too.

Saint Augustine was 60 miles away so we could travel that in six hours from half tide to half tide with full tide in between.  That made for a relaxing trip on the Georgia and North Florida ICW with few worries of running a ground. It did get us into Saint Augustine municipal Marina, known for its strong currents, at half tide which is peak current.

Saint Augustine got hit pretty hard by the hurricane. We were told that many floating buoys and markers would be gone or out of position. Going past the inlet just before getting here was certainly confusing and I did end up on the wrong side at least one marker, but the half tide got me through that one.

So far we’ve seen some damage but not total mayhem along the ICW. We saw nothing to stop our progress although we have been careful to travel at half tide or greater. 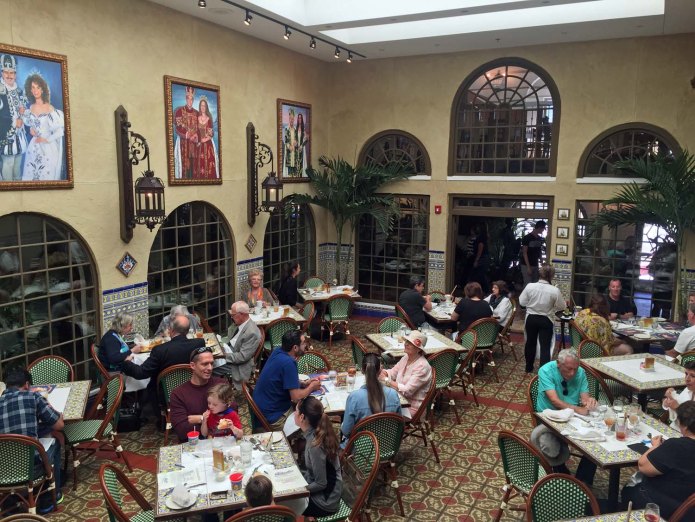 Sue at our table in Columbia. Our 2nd favorite St Augustine restaurant.

We got in just before six, too late to go out on the town. So we just had dinner on the boat and watched a movie. Today we had lunch at the Columbia and shopped around for some art (not the serious kind) to put in our Sarasota condo. Sue claimed St Augustine as her favorite Atlantic coast city. I thought it was Savannah (still mine).

They were working on dock damage at the marina, many docks unusable. Note the sign to the right.

The stern underwater lights gave us a show tonight. About 20 streamlined fish averaging 2’ long with scimitar shaped pectoral fins were swimming off the back. They would stay still for awhile and then move very suddenly to chase smaller fish that must have been attracted by the lights. Sometimes we’d see the smaller fish jump from the water 3 or 4 times in a row to escape the fish moving furiously in the water after them. Other times a smaller fish would dart straight across with the larger fish darting even faster after them. I think they got the smaller fish in most of these encounters, but it happened so fast it was hard to be sure. Must be tough being a small fish.

One thought on “To St Augustine”