Square riggers with fire boats in the distance

I don’t want to forget few things we saw coming up to Hampton. Approaching Norfolk and mile 0 of the ICW there was an event with 5 old square riggers of various sizes and fireboats spraying. Also there were maybe a thousand private boats. The river was packed. Long strings of boats were rafted together. We checked with a police boat at the edge of the mass. They said “If you think you can do it, go ahead.” So we slowly threaded our way through, changing course a number of times. Later I always wish I had taken pictures of things like this, but we were far to busy dodging to think about it at the time.

It was like this in any direction you looked.

A few minutes after we got out of that we passed the Carnival Sunshine coming the other way. I didn’t think of it then, but now I wonder what they did when they ran into that.

A few more minutes later we were cruising not far, but far enough from the navy ships parked nose out one after another on the east side of the river when we just noticed a submarine hauled by a large tug lashed alongside coming the other way a few hundred feet away. On the radio we heard the military boat telling someone else to turn away. I got a good look, but it seemed like an just an ordinary, if a bit small, nuclear sub to me. They noticed us and told us to turn, more than 90 degrees, off to port. A guard boat “shadowed” us out of the area. 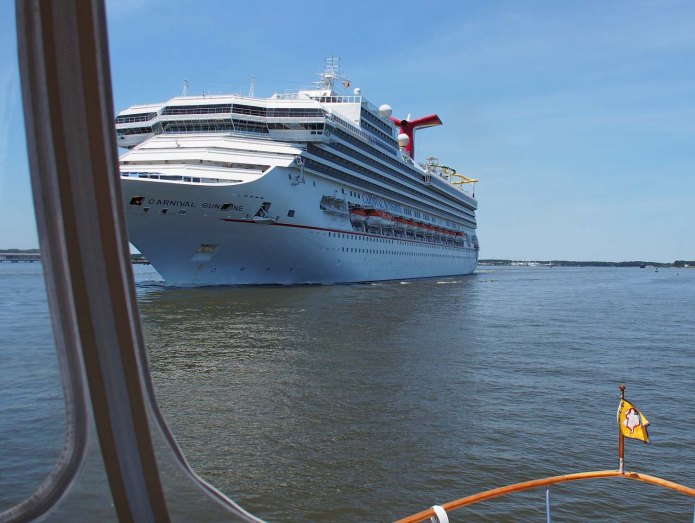 The river is pretty wide here.

It must be hard to keep military secrets with festivals, cruise ships and people like us who don’t know what to stay away from until we’re on top of things.

One thought on “On the Way to Hampton”