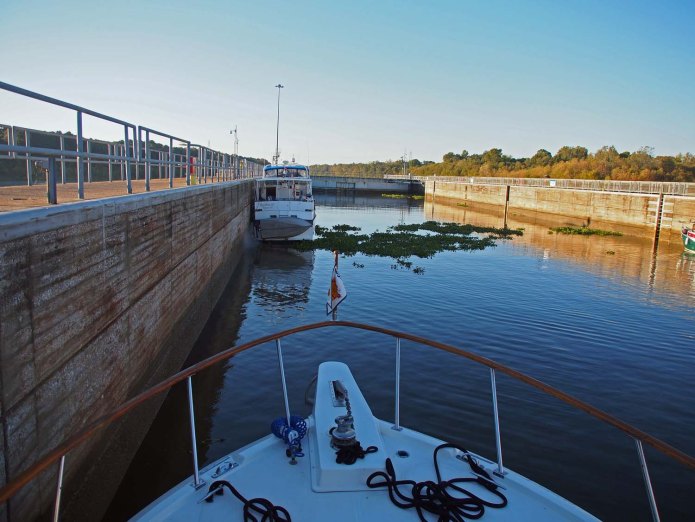 Before the Columbus Lock we had turned off the river to go to the marina. Five of us got there for an early ride.

Columbus was great, and we’ll be there again next year, but we have to move on toward Demopolis, the last town we’ll see before the gulf.

We went through two locks today. The Columbus and Tom Bevill locks. Columbus came immediately when we left the marina, and the next lock was about the halfway point. Mornings have been cool, but it warms up around noon, so we’ve driven upstairs all the time on the Tombigbee.

We are anchoring in a very small bay in Sumpter Recreation Area, 65 miles downstream from Columbus. This has a 100 foot entrance off the river west side that widens out to no more than 300 feet.

We can not go in more than 700 feet. We’re a bit over to one side to leave room for the three more boats that came in after us and anchored as well. It is shallow, so we all have little anchor chain (called scope) out. Swinging into each other is still possible but not likely. There should be no force if it occurs. The last boat was smaller, ran its nose aground and tied to a tree, so it won’t be moving. 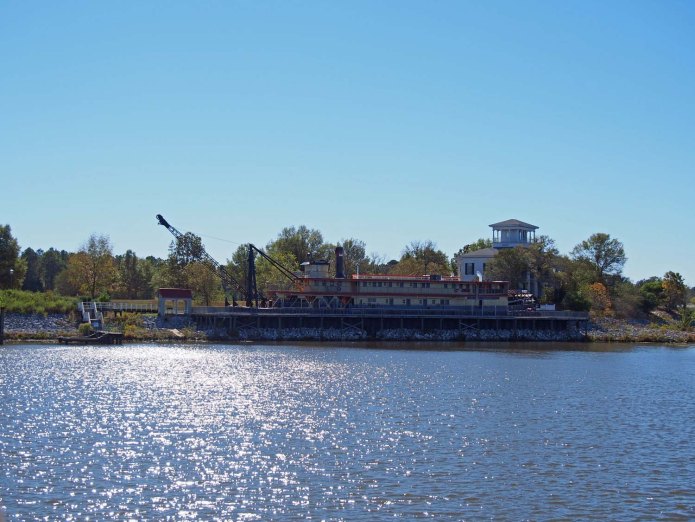 Passing by Pickinsville with an old river boat they put up on land. The Bevill lock is a few thousand feet past this.

It’s nice to be alone, but that will be less likely as we go south, since there are fewer anchorages. Nearly everyone using them will be loopers. Still it is quiet. If anyone has their genset on we can’t hear it.

While days are mostly sunny, some cloud cover has come back, and the starry nights we saw at the marina 3 miles out of downtown Columbus are no longer seen. We had hoped to do more star gazing on this trip. We probably could have if we had anchored out more. Hopefully we will see more stars when we take a planned trip to the Bahamas early next year and anchor out most of the time.

With no wind and no current, we let the boat swing. It got within 15′ of the bank a few times.