Took few pictures today, but this shows the weather after we started out.

Our Sumpter anchorage was just 4 miles above Howell Helfin lock, so as usual everyone left around the same time to hit the lock together. It’s always this way if we stay just above a lock. If one boat is a half hour late the lock will usually wait for it, so we try to get there within that window. Being strung out a bit is not so bad. We have to go in slowly and one at a time anyway, so it does take time just to move four boats into the lock. 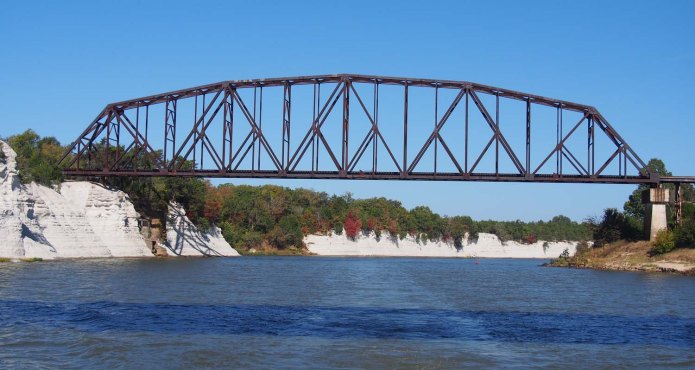 Current must must be huge at times. They often concrete the outside of bends in the river to prevent erosion.

In Demopolis we visited the Gainswood, a Greek revival home build before the Civil War. I don’t include many photos of places like Gainswood or Waverly since there is a wealth of information easily accessed via Google. We went in the marina car with loopers Dennis and Carol from Reunion, a boat we had seen off and on along the river. That way we each could sign up for a 2 hour slot, and had time for a tour, lunch at A Slab and More Barbeque and picking up a few supplies at Vowell’s supermarket.

Kingfisher Bay Marina is larger than we expected, and the first we’ve been in except huge ones like in Charleston that is open 24 hours a day. Turns out it is the last marina on the Tombigbee that is north of an arbitrary line drawn by the marine insurance companies regarding hurricane season. We’re not to go south of that line until November 1. You might remember that we previously had to get out of Florida, making us “rush” to Brunswick Landing Marina in June of last year. That is the first large marina on the Atlantic coast that is also above the line.

So that is why Kingfisher is so large. Many from Florida must store their boats here for hurricane season.

Gainsville was pretty elegant, but strange in layout. It was built in stages, starting from a log cabin.