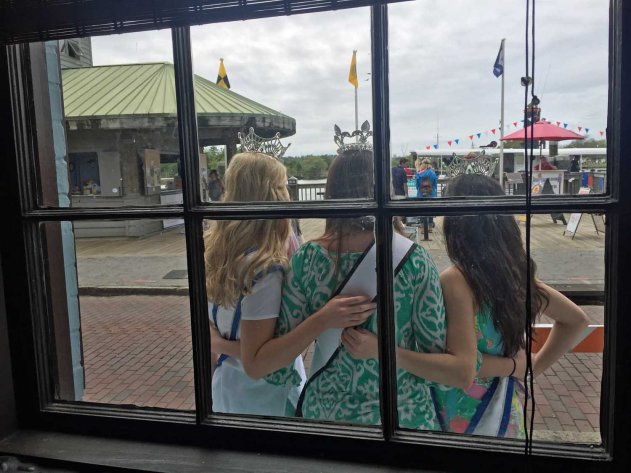 The festival had many  princesses. Three posed outside the window by the table where we ate lunch. Our boat could dock on the other side of the building seen to the left.

After that grounding yesterday we deserved a rest. We called Bridge Tender marina in Wrightsville Beach, to the east of Wilmington NC, for a reservation. They were full. This weekend had been all reserved there for a year! They said some part of an Azalea festival was going on over there. Last year it was a movie. Anyway I called Seapath Yacht Club across the river and they had space. When I asked about this festival he told me it was mostly in downtown Wilmington and would draw an extra 100,000 people there. He said to stay away from that area, it would be crazy over the weekend.

Crazy sounded great to us, so I asked for an extra night at Seapath. On the way in we passed Bridge Tender and indeed the docks and a huge deck that goes over a lot of the docks were completely full of people. Sue thought something might collapse.

We reserved a cab to take us to the south edge of the historic district where the festival parade would start at 9:30 this morning, right up to where all the streets were blocked off. The meter read $21 when we got there, so it was not so far.

The historic district is quite a find! Just getting there we passed historic mansions. One of those we toured later and another is a must see for next year. Across the river is the battleship North Carolina. Apparently much more of that ship is open to the public than is the case of most of the US battleships available for tour. We’ll have to see that too.

The Belamy Mansion Museum with Sue and the traffic police in front.

Next year we’ll bring the boat the extra 20 miles up the Cape Fear river and stay at the City Docks about 50 feet from where we ate lunch today.

We toured two active coast guard ships and the Belamy Mansion museum. The Parade on 3rd Street started at Market. The floats lined up “bumper to bumper” on 3rd and the bands linked up with a bit more space between them on lower Market. This gave us a great opportunity to review the entire parade. The floats waited quietly, but most of the bands practiced, which was fun to see. Some of their dancers were such high steppers it seemed they would have little energy left once they got onto the parade route.

One of the bands and marching groups. These fed from Market St. Floats from 3rd.

We toured two Coast Guard ships. This 200 footer was the largest.

Star Gazer will spend a few days in the historic district next year.

One thought on “Wilmington, NC”