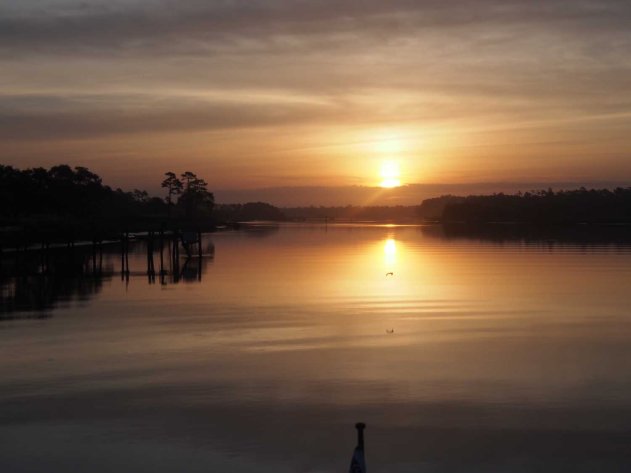 We started from Cricket Cove marina in Little River SC at 6:45 AM.

Well, this morning we ran aground big time. The edge of the channel caught the starboard side and spun us into the bank before we could react. The keel rode up over and into the bank forcing the nose a foot and a half or more out of the water. We leaned way over as the port side rested on the bottom.

We were ripping along at 10 mph and hit so hard the refrigerator doors opened and we had food (fortunately still in the containers) clear to the back bedroom. I was jerked out of my seat just like when the Enterprise was attacked on Star Trek, except our control panels didn’t shoot fire and sparks. I went down and pulled up floor hatches in the engine room to check the hull and for incoming water. Looked OK to me.

The tide was coming up, so in about 45 minutes the boat leveled out. I restarted the engines and after a few minutes of gunning them (and feeling for any vibrations from a bent prop) we backed off. As we continued we monitored the engine temperatures in case a cooling water intake got clogged. I can’t say we came out of it without a scratch because I haven’t seen the bottom yet, but everything seems great.

Seen just after we started out.

Fishing trawlers seen on the first part of our trip.

This guy stayed in one spot right at the edge of the channel. Not sure what he was doing.

The ICW gets close to the Atlantic here, just across the sand bar.

Of course if we would have hit a rocky bottom it could have been different, but most bottoms are mud or sand. It appears this boat will take a lot, and the keel, which goes deeper than the props, especially the front of the keel, seems to get it first.

The times we have run aground might have been avoided with better watchfulness, but it’s hard to keep 100% on top of things 100% of the time. This happened just north of mile 330. The passage there between the red floating marker 76 and the edge of the channel where we hit is very narrow. As we sat waiting for the tide I saw locals missing that red marker by only a few feet as they passed.

Anyway, once you’ve run aground a few times, it no longer seems such a scary prospect.

I’m sure you are wondering who was driving when this happened. I ain’t saying.

One thought on “Grounded!”