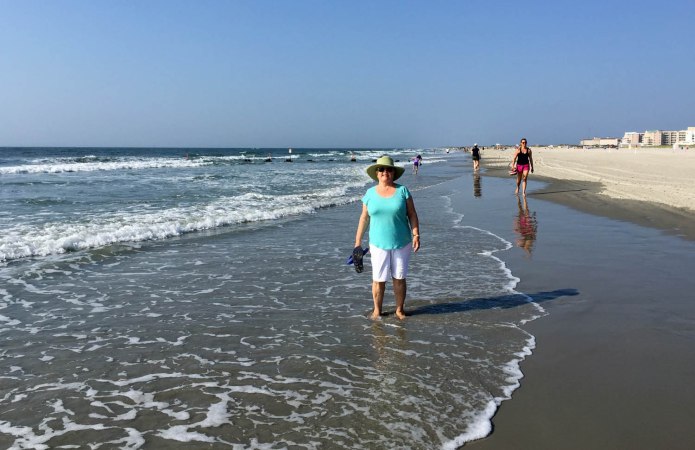 Sue got to the beach. Early morning with not many people out yet.

After docking in Cape May we went to the Washington Inn for dinner and walked the Washington Street mall a few blocks down from the Inn. We’ve done that before and enjoyed doing it again.

This time we also got down to the beach. The sand was fairly steep at the southern tip of New Jersey and signs warned of injury from the waves. They broke quickly and right at shore so that even the small ones could slap you around a bit. Just as we had seen along the way coming down, they maintain a level terrace mid beach where most people sit. 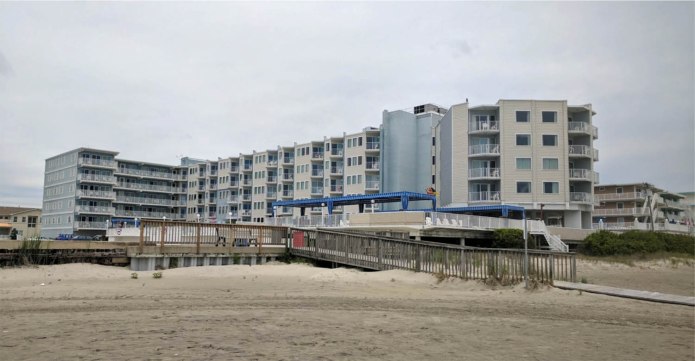 Our hotel, the El Coranado from the beach. Lots more neon on the street side of these.

When they hauled the boat out we moved to a hotel on the beach in Wildwood a few miles north. Here the beach had a very shallow slope and went for miles to the south. It also stretched north with an amusement pier in the distance. We walked the beach early in the morning, but stayed in during the (considerable) heat and humidity of the afternoon. Sue saw Jordan Peterson interviewed on TV which led to watching a few YouTube videos and downloading a Kindle book. He appears to be somewhere between Stephen Pinker and C.  S. Lewis.

The first evening as we drove past the hotels on the “strip” next to the beach. It seemed strange, like an old dream or something, until we realized we were seeing a slice of life from when we were kids. The hotels, restaurants and look of everything was out of the 50’s. I should have taken photos but never thought of it then and was busy driving. 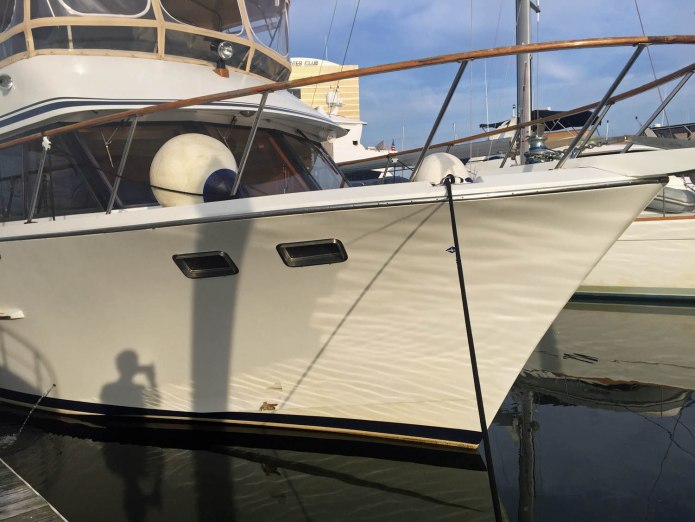 Not much of a ding, but water can get to the core between inner and outer glass, which is not good over time.

We stayed in the El Coronado right on the beach. Built in 1970 it’s one of the newest in the area. There were no chain hotels, no chain restaurants, no chain anything.* Everything there had been there for a long time, most since the 50’s. The place that time forgot?

Later on our way to Philadelphia we drove the slow route through south Jersey and saw no new houses. I’m not saying there aren’t any, we just didn’t see any. No signs advertising new homes or subdivisions. We also saw a few abandoned factories. We drove right along one for a ways. I’ve done no analysis, but would guess the south Jersey area has not grown, maybe even shrunk, post WWII. This is not so different from towns we saw along the Erie Canal. It was just pushed in our faces more by all the neon lights and activity in the beach area. 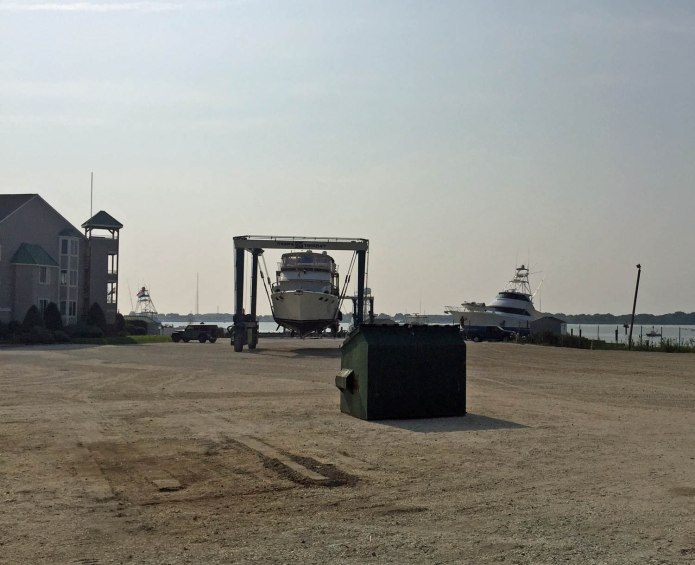 Early in the morning Star Gazer travels overland to the maintenance area.

If the area hasn’t grown, it seems to still do OK. I’m told the hotels have good occupancy. The beach is no less fun than it was 50 years ago and people still come like they always have. It was great to see.

On our way to Philadelphia we stopped at the Vincentown Diner for a more than adequate lunch. We also had our first experience with active cruise control in our rental Camry. Just a little more conservative, if less smooth, with the brakes than I was, that’s how I first noticed it. It also accelerated back up when it could. I liked it but wondered if I would gradually pay a less attention to things if this kept up.

* A more detailed search on Google Maps showed a Day’s Inn & a Howard Johnson toward the north end of the 6 mile long barrier island. Three Dunkin Donuts are around the amusement park area. We never saw any of those, but did see a McDonalds near the bridge to the mainland, about a mile from the beach. Still not much for what appears to be the major beach resort area for the whole state and beyond for more than the last hundred years.