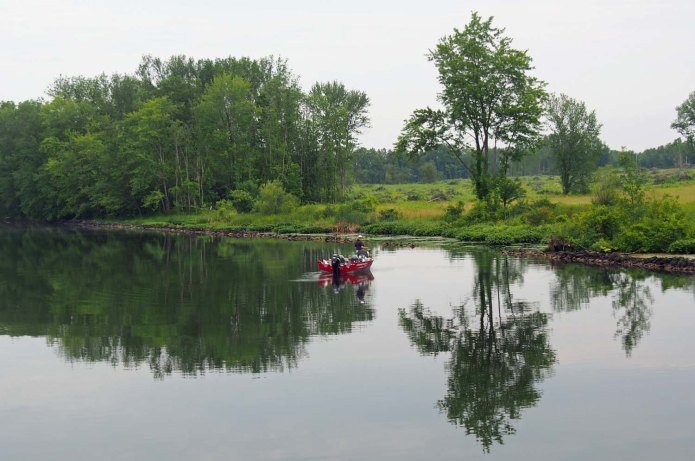 It’s Saturday, and we passed fishing boats all the way. This is the first, 200′ from where we were docked.

We left just before 7 this morning for Oswego, hitting our last Erie Canal lock, 23, and then 7 locks on the Oswego Canal before Lake Ontario. All locking was down, 126 feet overall to the 243 foot elevation of Lake Ontario.

The Erie Canal is like a very long park.

We had a following current of about 1½ mph most all of the way, so I could throttle back and just glide along at 10 mph with little or no wake. This was a good thing, because all the little Saturday fishing boats were out. I still had to slow a bit for them, but It was nice to glide by at a faster speed. The weather was bright but overcast and called for a light jacket in the morning, but very comfortable after the last few hot days.

We floated behind the main pack with the stragglers.

The other boats out in force were kayaks. I found out at (Oswego) lock 4 that today was Paddlefest, where a great many kayakers set out from various places above lock 5 and paddled with the current to Oswego. We got to lock 5 just as the gates had closed on several hundred kayakers. We locked through afterward and came out to kayaks everywhere, being herded by a number sheriff’s boats and jet skis. I eased up to a sheriffs’ boat and learned that the locks 6 through 8 would each take all the kayaks together as a group through before any other boats could pass. With time on our hands we turned off the engines and found that with the current helping we still went almost as fast as the stragglers. It was the first time we had just floated down a river, and was quite pleasant. 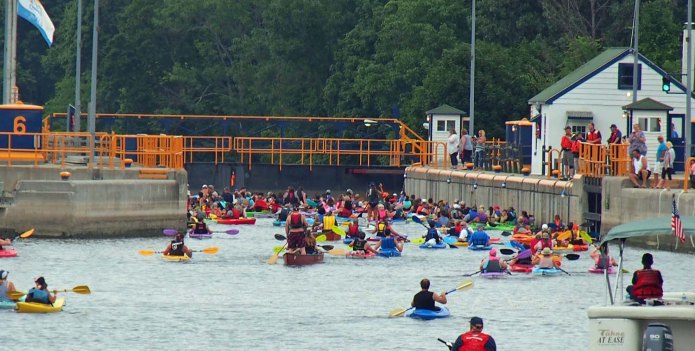 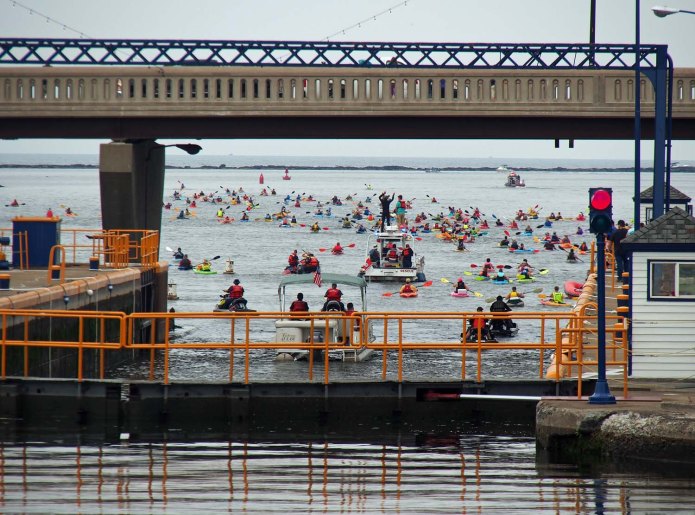 Looking over the lock 8 gate. The last of the herders leave the lock. Ontario is beyond the distant breakwater

We finally did get through the last lock, number 8, and tied up at Oswego Marina at the end of the canal. Just a few hundred feet out to Lake Ontario. The weather is getting a bit worse in the next few days, but the forecast for tomorrow (Sunday) looks doable, especially since we’ll be off the lake and into the St Lawrence by noon.

One thought on “Paddlefest”