Pier 5 Marina as we left it at 6AM. Pier at left is condos. Franklin Bridge to right 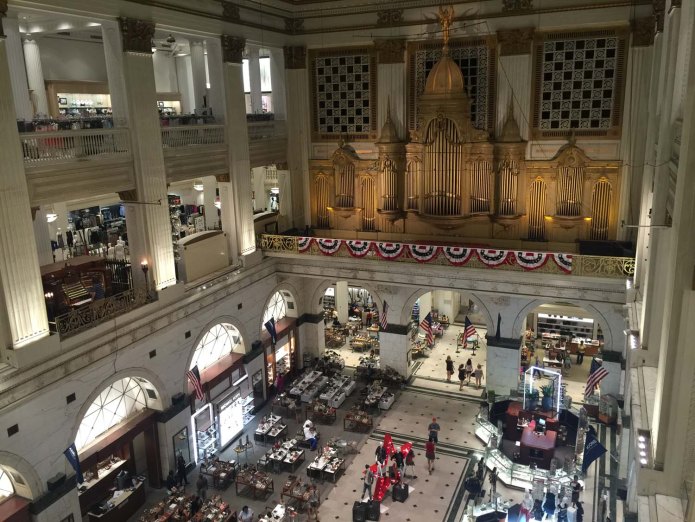 Wanamaker Organ in the Grand Court at Macys Philadelphia. We got there too late for the noon concert and did not want to wait for the 2nd at 5:30. Console to the left.

We left Philadelphia early on the 12th wanting to go all the way to Cape May at the southern tip of New Jersey. About 2 miles downriver we pulled in alongside the SS United States to take a good look. Its paint is peeling off pretty badly. There is a group trying to save it but it may be a lost cause. Its size is not impressive compared to modern cruise ships. If they restored its interior to original condition that would look very utilitarian by today’s standards. I don’t think the fully restored liner would be all that interesting to see. Still, it’s a shame such an important part of our maritime history may be lost.

The battleship Olympia (1898) from the Spanish American war, oldest steel US warship still afloat. Next marina down from ours.

SS United States, fastest passenger liner ever built. Superseded by the Boeing 707 in the 60’s.

It took enough time to get to Delaware Bay Marina, which is along the way, that we decided to stop there for the night.

The next day we traveled south from the top of Delaware Bay. While Chesapeake Bay is quite the boating and fishing playground, Delaware Bay is just a place you get through and get over with. The channel down its middle is deep enough for large ships, but depths get too shallow for our boat outside of that. It’s hard to get close to its shores, plus they are marshy enough that there is little in the way of towns and development along them.

Last year our trip down the Delaware with Keith and Gayle was very smooth, which I learned was unusual. This year was different.

Delaware bay is directly open to ocean waves and winds while the Chesapeake is not, so it can be a lot rougher. We had following current for all of our trip but the first hour or so. The south wind was steady and blew against the current, magnifying the waves. We had a little water over the bow and the ships bell rang about 10 times. The waves were close and fast, however, so overall the trip was a little more comfortable than our night trip from Brunswick to Charleston. Only the middle third of our trip was rough. It was smoother at both ends.

Canyon Club Marina in Cape May is large and upscale. 95% of the boats here are sport fishermen from 40 to 80 feet. A lot are local, but it’s less than 3 hours by car from NYC. A lot of people from up north keep boats here. More of these boats with 3 or 4 guys each came in yesterday for a fishing tournament that started today. We saw some mighty impressive tuna, one 170 lbs., on the dock this morning. I’m told they’ve gotten that particular kind of tuna up to 550 lbs. That I’d like to see.

At this time of year almost everyone who works on boats is booked 3 or 4 weeks out. One reason we came here was that they could (and did) replace our macerator pump that drives our sanitation system. Replacing that did fix the problem. Without that pump we rely only on pumping out our holding tank and that can be difficult some times. For example, there are no pump out facilities in or near Philadelphia or anywhere in Cape May. The only one in the entire region is Delaware Bay Marina. Apparently this is due to various contradictory government regulations. 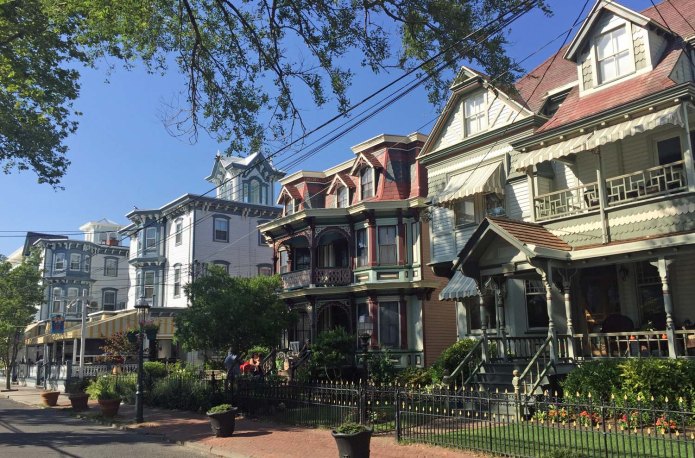 A street of Victorian houses in Cape May

We knew Cape May was a place loopers wait for a weather window to go out on the Atlantic past New Jersey, but did not know it considers itself the oldest resort community in the US. It does have a very touristy walking street downtown with more souvenir shops, restaurants and such in a small area than we have seen for some time. Since we are here for 2 nights we had most of a day to spend down town. We had a light lunch in a hot dog – ice cream shop, spent the afternoon there and then went to the suitably elegant Washington Inn for dinner. We finished up with some resupply shopping at Ace supermarket, which seems to be the store of choice in this area. Sue says we’ll have to allocate more days in Cape May next time.