On longer trips we leave at first light, so we often see sunrise on the way.

I write this as we sail the open Atlantic bound for the north coast of Florida or Georgia.

I now know more about radiator caps. I called a store (AID) in Freeport and ordered what I thought would fit. Freeport is nearly an hour away, but for $25 they delivered it to the marina after we arrived. It didn’t fit. This is where I learned about different cap depths. They offered to take me and the old cap back to Freeport, where they took me to their place as well as a to a competitor. We found caps at each that looked promising, and one of them fit. The other can be a spare for the main engines. They drove me back after store hours and didn’t want anything more for it. They refunded my money for the caps that didn’t fit.

We could still leave! People in the Bahamas do get delayed a few days waiting for a part to get expressed over from the US. I didn’t get back until 7 and we were getting up at 5 AM to leave at 6 to sail the Atlantic, so we tidied up and went to bed.

Mongoose Hunter came up from behind and passed within 1/2 mile in front of us.

Ideally a weather garage door is better than just a window. Good winds and waves before and after you sail, as well as during, are the best. Predictions are usually good, but they can move a day forward or back sometimes. Looks like that is what we are having today. Yesterday we were exposed to the open Atlantic for just the last mile getting into the West End marina and it was flat. It’s flat again today.

Earlier we passed a couple of freighters, two sport fisherman and the Carnival Elation on its way to Freeport. All these were several miles away except for the freighter Mongoose Hunter. It was 19 mph coming from our right rear at what appeared to be a collision course, but AIS said we’d miss each other by half a mile, and we did when it later passed in front of us. This was all nearer to the Bahamas. Nothing since then.

7 miles off, Carnival Elation, bound for Freeport, sails under clouds and hits a patch of sunlight.

As I write this at 1:30 PM we have been going about 7 hours. The boat is set to go 9.5 mph to save fuel. Our speed is now over 13 mph. My original goal was Jacksonville FL, but the autopilot estimates we’ll be there at 6 AM tomorrow! That estimate will get later as we come out of the Gulf Stream, but I think we’ll still be there before 10 AM. We can extend our trip 50 miles and come it at Brunswick GA. At this speed we are using less fuel. So far it appears fuel will easily hold up way beyond even Brunswick. Should we go for Savannah? We’ll decide early tomorrow morning as we get closer. 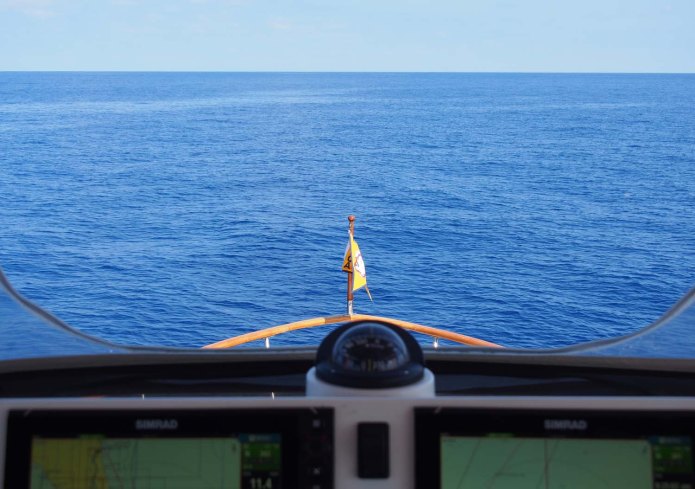 Heading north on a flat Gulf Stream with a south wind behind. Doesn’t get better. Hit 14 mph a few times. Speed set at 9.5.

We 40 miles offshore right now, slowly getting closer. That is a bit far from help if something should break, but I’m hoping were good for another 12 hours of running. Almost bathwater flat. Long period rollers maybe a foot high.