We hear a flop. Something fall from the boat? It’s good to see our friends again these last three days.

We ended up three nights at Eastern Shore while we got a few minor things done to the boat. Since we arrived Saturday and no one was there Sunday we had to wait until Monday to get the rear shower sump pump and a diesel leak fixed. While they were at it a couple of other things were found, so we fixed a water pump housing seal, replaced our main fuel filters and some fan belts and did not get out until Wednesday morning a bit late.

Now we know it’s Florida. More development along the ICW.

Still a lot of country in the FL panhandle. Some other areas have only modest waterfront houses.

We ran to Palafox Pier Marina in Pensacola FL on Wednesday, then St Andrews in Panama City on Thursday and finally here to Apalachicola Face Dock on Friday. We are now waiting here for a “weather window” to cross the Gulf. Palafox and St Andrews were fine places but we saw little there. Downtown was close enough that we got of the boat and went to nice appearing but unmemorable restaurant in Pensacola.

Part of the Pensacola naval bases. That thing aimed at us on the right is like what we saw in Mobile.

I thought we might come into St Andrews in the dark, but we finally got in at 6, with a half hour of twilight to spare. Dave and Barb from the DeFever club helped us tie up and joined us for a bit of wine. We were headed for Carabelle, from where most loopers start their Gulf crossing. They are on their second loop and said Apalachicola, with a nice downtown right off the boat, is a much better place to wait. It is 20 miles west of the ICW exit at Carabelle, but you just start your Gulf crossing 2 hours earlier and it’s all the same.

The charts warn not to share this channel constriction with a tow. At another like this I had to stop for a tow. 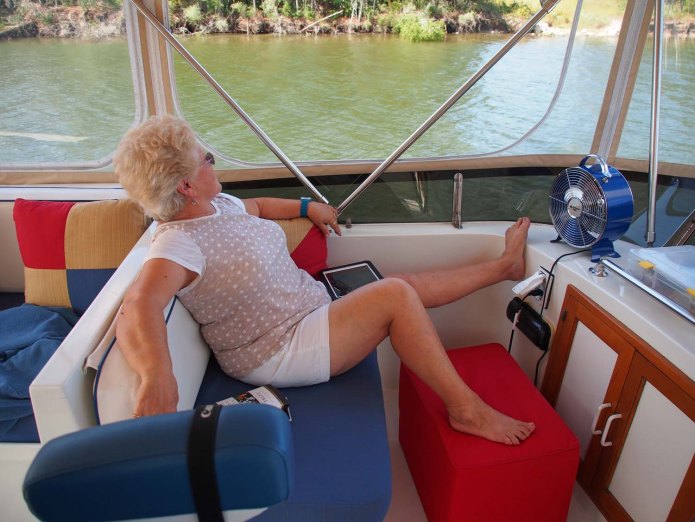 My able first mate is always on the alert.

So here we are in Apalachicola parked right behind Dave and Barb’s boat Hallelujah. It’s Saturday night and currently looking like we might have a window on Monday.

The north half of the Florida west coast is very shallow for miles out. There is no ICW past Carabelle until it takes up again just above Tampa, so there is little alternative to just crossing the Gulf of Mexico straight from Carabelle to Tampa. It’s 180 miles and so will take us about 18 hours. We’ll start during the day to navigate out of the ICW and cruise the open Gulf overnight, coming into the Tampa coast area with its many crab pots and other things to dodge mid morning the next day.

Hallelujah leaves a canal and heads into a channel through a shallow lake.

When just for fun I checked last Sunday the Gulf wave heights were 12.5 feet. That means if I were up on the fly bridge some peak wave heights would be about eye level. So we wait and watch the NOAA wave height predictions. At the moment this Monday looks good for leaving. Stay tuned.