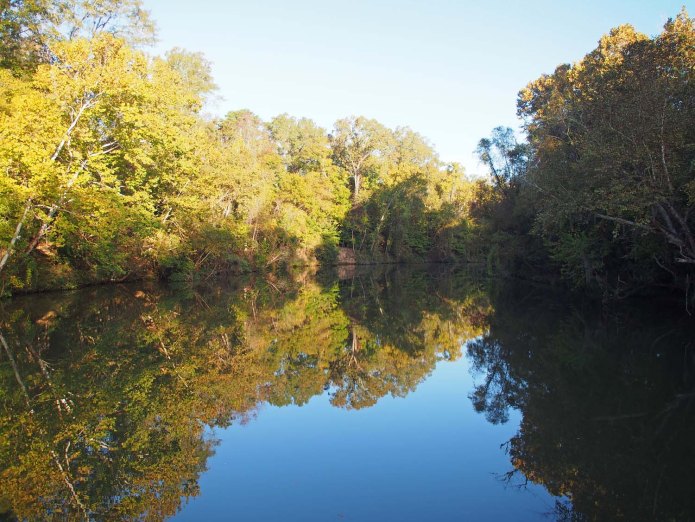 Okatuppa anchorage in the morning before we left.

Today was another partly cloudy pleasant weather day on the river. Days are slowly getting warmer as we go. We backed out of our anchorage. I think I could have turned around, but wanted to try out our new engine controls while standing at the rear of the boat anyway.

As we came out we saw Reunion with Dennis and Carol coming in the distance. They had anchored 20 miles upriver from us and had probably started at first light. We didn’t get off until about 9 with me working on some plumbing in the engine room. Not the first time we’ve seen them since we had lunch together in Demopolis. Our Okatuppa anchorage was a few miles upstream from Coffeeville, the last lock on the Tombigbee, so we locked down together with them.

A number of our anchorages look like this gap in the trees as we approach them on the river.

They called us and mentioned they would be going to Three Rivers Lake anchorage where we also planned to go. The day was pleasant and uneventful, and we arrived and Three Rivers about 3:30. The channel in was long and winding. It would have been scary but for the number of reviews on Active Captain saying that it had plenty of depth in the center all the way in. I did see 8’ at the end of the channel, but never less than 10’ elsewhere.

The channel was very narrow with tree branches sometimes scraping the hull as we idled along. There was absolutely no way we could have turned the boat around. Had the channel become too shallow we would have to back out all the way, which would be quite a feat. 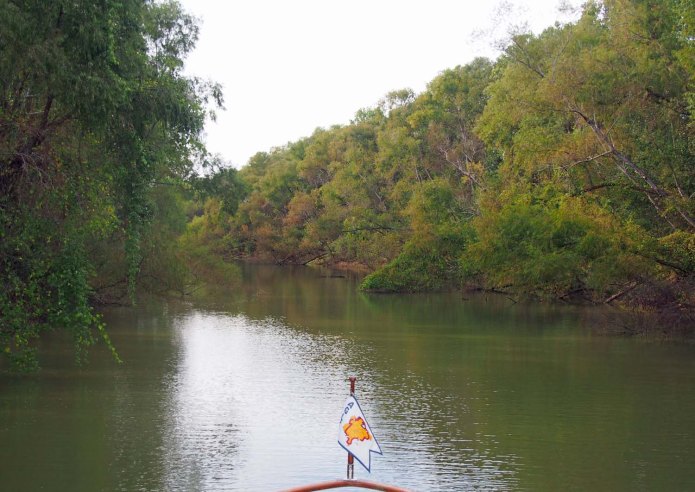 Our hull scraped branches on both sides at the same time on several occasions.

After about 2000’ the channel opened out to a small lake with room for several boats. We proceeded another 2000 feet into the lake and found, as the reviews said, that the depth decreases quickly there. We may have been a bit aggressive in our exploration and ran aground. We wallowed around for five or ten minutes before I got us out. For a few minutes there I was wondering what we would do if we really got stuck way back in there.

We got to try out our rear anchoring techniques again and have things down to a science now. Like a lot of things we’ve done with the boat, what seemed a bit scary turns routine with just a few tries. This stuff really is not that hard.

You might note that running aground remains scary. I’m resolved to do it less in future. I will say that this boat is built like a WWII LST. You run it aground, you back it off, and it seems none the worse and runs just fine.

Reunion anchored ahead of us. Trust Me as it enters from the channel.

A few hours after we arrived Reunion pulled in, and then an hour or so later, just at last light, Trust Me came in as well. There was plenty of room for all, especially since two of us used rear anchors and did not move at all.