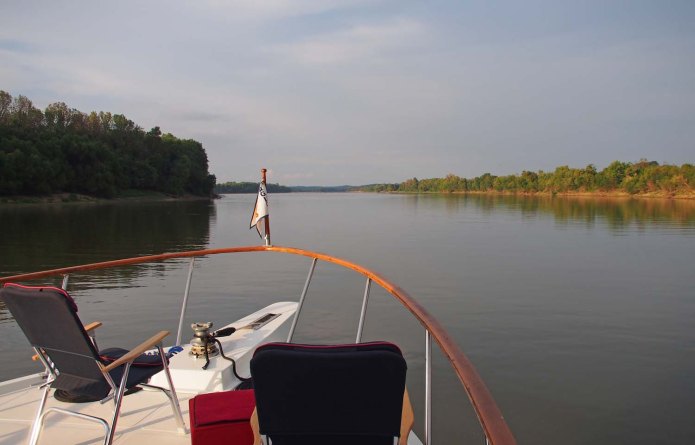 Towhead Island at right. Cumberland river entrance ahead through shallows. We went back around the island.

We stayed at our Cumberland River mouth anchorage a second night. That evening three other loopers came in one by one, one settled some distance in front of us and the other two to our rear. The weather was overcast but warm enough for us both to spend a lot of late afternoon early evening time on the bow. Few if any bugs made that work pretty well, one of the advantages of traveling in the fall. All was quiet. The other boats were too far away for us to call out to each other. Our genset was not needed until much later, and if the other boat’s were running we could not hear them. Dead quiet until the crickets started up. 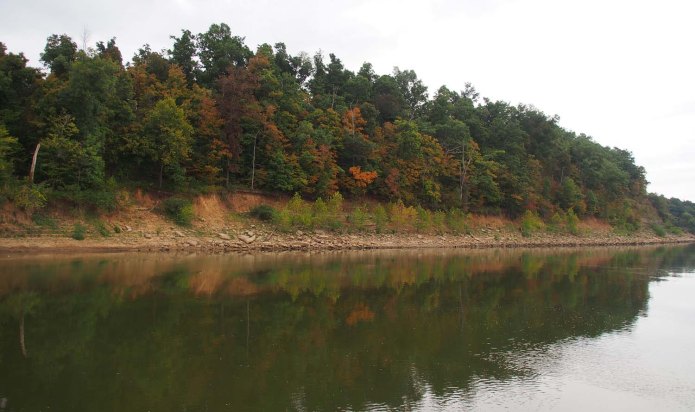 Fall color is just starting to show along the Cumberland.

We pulled up the anchor and were underway up the Cumberland River before 8. It’s narrower than the Tennessee and 10 miles longer. We heard the Cumberland was more country like and natural. We did pass a gravel business and a few places loading wheat into barges, but no major tows. Mostly low hills and trees.

Near the end of our trip we hit the Barkley lock which was just opening its doors for a houseboat ahead. We locked up 57 feet and turned into Green Turtle Bay Marina only a half mile further on. It is in the very small village of Grand Rivers KY between the large Barkley and Kentucky lakes.

Barkley Dam with the lock on the far right.

Into the Barkley Lock for a 57 foot rise to Barkley Lake and Green Turtle Bay Marina.

Green Turtle is one of those marinas that nearly all loopers hit, and after that long stretch without any marina, 294 miles for us, many are staying awhile. The place is packed, with at least 30 looper boats everywhere. The transient areas are full, so we ended up on the sales dock with the for sale boats. We have two nights here then have to get out to make room for more incoming loopers.

We went out to dinner at the marina’s yacht club our first night back in civilization, and both things we ordered were not good at all. The restaurant at the Illinois Valley Yacht Club in Peoria was not much better. I guess Sue and I are not destined to be Yachtspersons, just boaters. We had no intention of eating out tonight, our last night at the marina, but Ken and Lois from Camelot who we met in Oriental NC came by and invited us and another couple to Patti’s 1880’s Settlement in the village. It was outstanding.

Just forest all around. Turn a corner and this huge gravel yard appears in the distance.

One of the few work sites along the lower Cumberland.

Two nights in a marina are enough. Sue just has to anchor again, so tomorrow we cross through the canal to Kentucky lake and head 40 miles south to an anchorage called Dry Fork Bay.