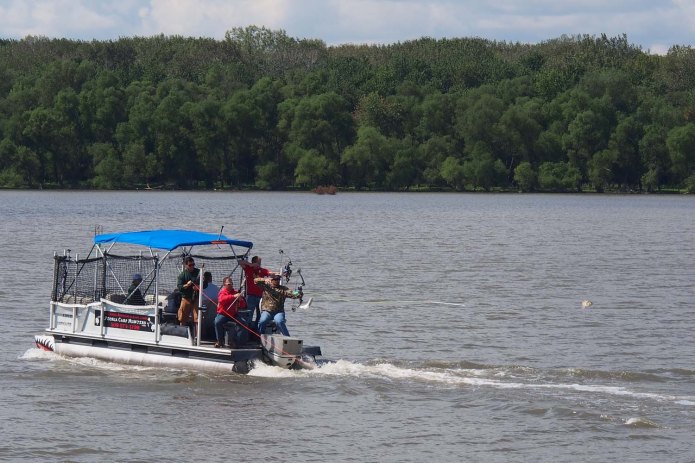 Hunting the wild Asian Carp. Two leap here, one being shot at and another just at the back of the boat.

Jim and Paula joined us on Thursday the 10th while we were still at Heritage Harbor Marina. We as well as they are scheduled to fly out of St Louis on the 17th, they to go home in California and us to fly to Southern Florida for a medical appointment. We have 258 miles to go to Alton Marina where we will dock while we leave the boat. I know the distance because it turns out there are mile markers on the Cal Sag – Illinois River as well as the Mississippi below, so I’m able to give accurate distances.

We left the next day for Peoria. The gate was open when we hit the Starved Rock lock and we went through quickly. We wanted to tie up at the Peoria city docks, but they had room for only two boats our size and were full, so we were at the IVY Marina five miles above Peoria for two nights.

We did see evidence of the famous leaping Asian Carp, but our boat did not stir them to jump. Smaller boats with faster rotating propellers can get them to jump, although we never saw the spectacular scenes like those in some of the internet YouTube videos. Sometimes during our stay at Heritage Harbor Marina I could stomp the dock and see and hear 30 or more swirls in the basin as the fish moved rapidly away from the surface, but no leaps. 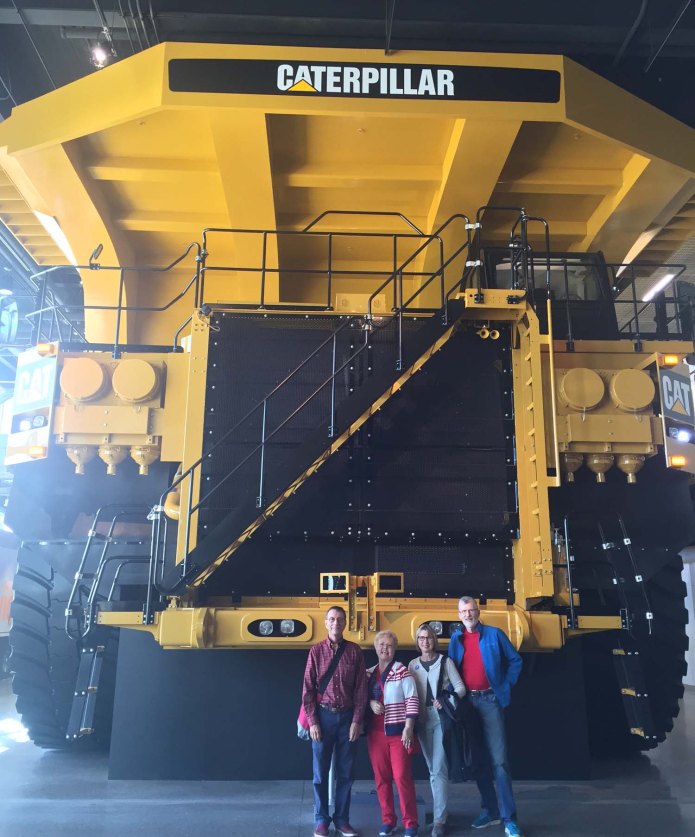 Jim, Paula, Sue and I in front of the largest dump truck Caterpillar makes.

Jim and I spent the next day, Saturday, seeing the Caterpillar visitor center and museum in downtown Peoria. There was a natural history museum next door where Sue and Paula spent the morning. After lunch we all returned to the Caterpillar museum. Sue and I got in free since we have two Caterpillar 3208 diesels on our boat, making us Caterpillar customers.