Just before we left. Looking east over our marina breakwater to the outer breakwater entrance.

We started out at 7 AM and arrived at Hammond Marina near the channel entrance at 8:30 when it opened. I wanted to fuel up to make us float as low as possible to give us clearance for low bridges. I already had filled our water tanks last night. If I had done it right we would have filled up before docking in Chicago and gotten into the river earlier than we did. As it was we had plenty of time, in part because we had very little delay at any locks or bridges 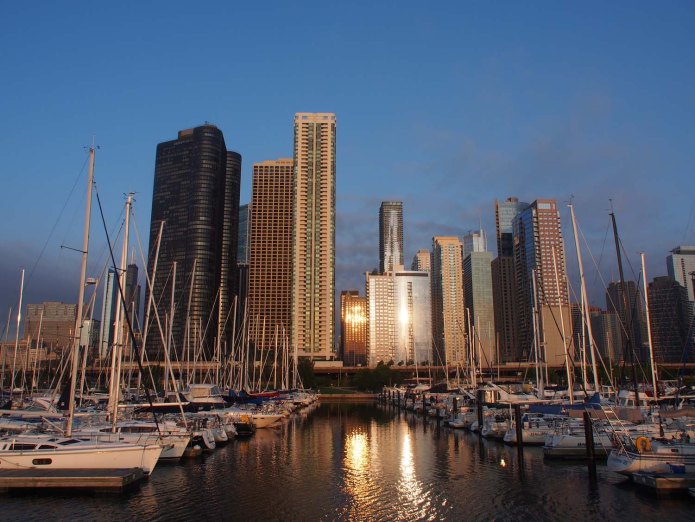 Taken as we left our marina.

The Cal Sag Channel and Calumet River have quite a history. They have supported heavy industry from the 1870’s and have seen a lot of pollution and recently restoration. There were massive bridges, factories, refineries and a great many barges and tows serving them. I don’t know about natural beauty, but it sure was interesting.

Our grandsons should have been with us. Trains every few minutes. Five bridges in this picture.

We eased under bridges with one foot clearance while trains were rumbling across them. We had a train going right over our head at least three or four times. On a particularly close bridge I had to stop and wait for a train to pass so it would be quiet for Sue and I to communicate. She was at the controls easing us under while I watched up top to see if anything would hit. Because of recent high water in the great lakes clearances on the first twelve bridges, before the first lock, were much less than in our references, so we had to be careful.

Bridges stacked on other bridges. I got under all these, even the low one. It had a train on it as we went under it.

We hit more bridges in less distance than I have ever seen anywhere whether in a car or boat. Some seemed almost stacked on top of each other. I called to ask one bridge to open only to be told it was open, right over me. It was the next bridge I needed to have open!

We had to stop for tows a few times. Once we waited while a tug took up the whole channel as it pushed a barge sideways into a group of barges. Tugs pushed barge groups up to five long. Steel barges were parked in groups thousands of feet long along the canal bank. The canal was narrow enough that the parked steel barges were close enough that they threw off the Autopilot compass and pulled us right into them, forcing me to steer manually for considerable distances.

There were two locks today. The first only 12 bridges into the canal. It was 1000 feet long and more than 100 feet wide. Another boat got there well before me, but the lockmaster told me he waited until I got there to because he saw me coming on AIS. Lockmasters here all use AIS to track their main clients the commercial tows, all of which have AIS.

The tow leaving our second lock has only two barges, but they were long ones.

The second lock was much later, just 5 bridges before our stop at the Joliet free dock. When we arrived three other boats were waiting. Two of them had already been there an hour and a half. As we pulled to the wall a tow pushing two very long barges came out of the lock the other way, after which we could go in with the others to lock down 38 feet. So if I had not filled up this morning, I would have started into the channel no more than an hour earlier and would have ended up waiting that time at the second lock instead. As it was we had no more than a ten minute delay anywhere, a new record?

A mile out from the lock we hit the Ruby, Jackson, Cass and Jefferson St bridges, all of which were able to draw for us just a few minutes before their 4:15 rush hour cutoff. So we made it to Joliet free wall, just after the Jefferson St bridge at 4:15, but just barely.