Chicago from our boat in DuSable marina.

We’re still here after four nights, and the weather has been great the whole time. We’ll leave tomorrow morning (Friday). After arrival on Sunday we took a cab up to the small triangular Mariano Park at State St and E. Bellevue Pl. This is a restaurant area near the north end of the State St shopping area. Weather was great and restaurants were packed with wide sidewalks everywhere full of people eating outside. If this was Sunday night what would Friday be like? We only had to wait 20 minutes for a table.

Afterwards we stopped at a Barnes and Noble a few stores away. Sue sat in the coffee shop looking at some Chicago books while I looked around other areas.

I really liked the miniature rooms in boxes maybe 1 1/2 foot on a side. Hard to pick just one out of our pictures.

Monday was the big art museum in Millennium Park. We stayed until closing and missed whole sections we’ll have to see next year, and that’s without any modern art or impressionism, which are considered major parts of that museum. We had dinner at Panera Bread across the street and Sue then went to the T J Maxx a block away while I hit the comics store across the street.

Sue loves museum restaurants for the view and setting. I like them because food is usually unusual and good.

Tuesday was a walk through part of Millennium Park and then a stint on the open top Big Bus to get a good overview of the loop. Weather again just right. Mid eighties and sunny. We hopped off for lunch at the Corner Bakery and again for Sears Tower  and then got back on for the rest of the circuit. On the way we saw the water taxi stop and decided to come back around to that.

Waited in line to take selfies in the glass box in Sears Tower. Didn’t work, but Sue’s pic of me turned out. 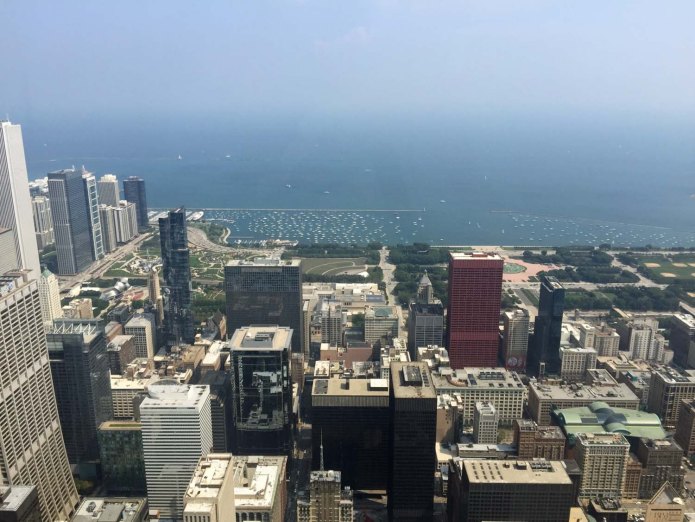 The mooring area on the way into our marina from Sears Tower. Our marina is left of it behind buildings.

The water taxi goes through nearly all of the downtown part of the Chicago river, going as far as Chinatown on the downtown south edge. I was wanting Chinese food, the reviews said most of the great Chicago Chinese restaurants were in Chinatown and this was a great way to see Chicago from the river.

The Lao SaChing where we went was in the top ten and had awards plastered all over the walls. I did like the food although it could have been a bit less salty. Sue didn’t like it. We’ll come again but next time try a different restaurant. There were certainly plenty to choose from in a small area. This appeared to be more of a Chinatown for Chinese people than for tourists, but still a nice friendly place.

After dinner we rode the water taxi back to see Chicago at night. The only way to go to (or return from) Chinatown.

What to show of this fantastic house? How about the ceiling in gallery room?

Wednesday we started at the Driehaus Museum, one of the finest Gilded Age homes in Chicago built after the Chicago Fire. While certainly not the largest, this had to be the finest finish work with wood, tile, marble and metalwork we have yet seen in a home. There is absolutely no question that they don’t build them like they used to.

There was a Bloomingdale’s Home store a block away that Sue wanted to see. It was hard not to notice since it’s building was originally done for the Nobles of the Mystic Shrine. It was completely modernized inside, so I left to visit Holy Name Cathedral, the Tribune Tower and other places along the Magnificent Mile. I got back in time for Sue to finish her shopping at Trader Joe’s across the street from Bloomingdales.

Our water taxi ride started here, at the base of the DuSable Bridge.

After getting groceries back to the boat and a short rest there was still time to go to the Shedd Aquarium which was open until 10 PM on Wednesday. While billed as the second largest in the world (after Atlanta) it was not so great. Most of that size was in stadiums for porpoise and other shows, play zones and large terraces. We did learn a lot about African fresh water lakes and fish that we had no idea about before. Lake Tanganyika is really an interesting place.

So now, on Thursday morning, we’re taking it easy. Maybe we’ll go into town a bit, but nothing big. We’ll leave tomorrow for twelve miles south to the Calumet channel entrance. We’ll have a great many bridges. Most we’ll go under with a few feet clearance but some will have to draw for us. We’ll also hit three locks on the way to the wall at Joliet. These will be commercial locks, much larger than what we’ve been in so far, and with priority for the large commercial freight barges. One tow can have a number of barges that may have to be broken up to get through the locks. We may have to wait awhile.