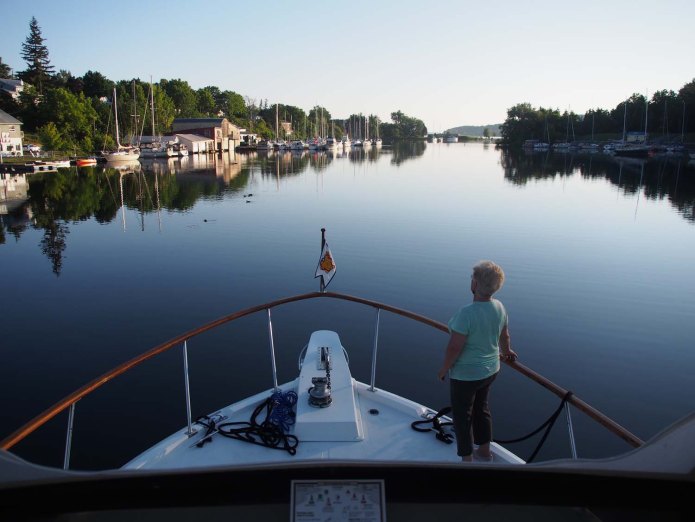 We were off early the next morning to Trenton. Forty miles and four hours later we arrived. We stopped at Fraser Park marina for a pump out and their system, which they thought was up, was down. There is no other pump out facility for a few days into the canal, which we thought strange for an area which is “no discharge”. Fortunately we are prepared for such things, but 95% of the boats out there are not. Wonder how they handle a situation like this? I can guess.

We pressed on up the channel. I checked my favorite app, Active Captain, that knows everything about anything along US waterways and found it was surprisingly lacking regarding Canada. It did not show where the locks were, let alone their phone numbers and call frequencies. When we got to what I thought might be the first lock gate for the famous canal it seemed that we took a wrong turn and had come to a unused gate on an abandoned section of the canal.

The lock looked old and abandoned first because all these locks are old, built in the 1800’s. In most locks the gates are still hand operated. Second, all that is visible when approaching lock 1 from below are the old timber lock gates and train bridge over. Also the bright yellow painted rails on top of the gate were not there. I guess the lockmaster crossed at the upper gates. Also the lockmaster’s building was set back and not visible. Unfortunately I was too puzzled to take a picture. It was rather forbidding.

We tied up to a concrete wall in front of the gate and I ran up the stairs beside it to see if it was abandoned or what. I found the lockmaster getting ready to open the gate for us. I talked with her and found out how things work. You don’t call ahead, you just show up. They’re watching for you and will open the gate when possible. Once you’re in they come and ask you how far you’re going and call ahead to tell the next lock of your arrival. The other locks can then be waiting for us with open gates, assuming other traffic does not interfere. It did not for us so we smoothly transited locks 1 through 6, most of which were within a mile of each other.

We’ve risen in this lock and they are manually opening the gates in front of us.

There are tie ups along the wall above each lock. The one above lock 6 has shore power so that’s where we sit now. The waterway here is higher than the surrounding area grassy berm on each side. On the other side of the berm is a park for the city of Frankford. I walked into the park and across the bridge into Frankford, but it was 5:30 before I got there and everything, which was not much, was closed and deserted. It’s and old town with a small downtown area. It isn’t large enough to have a new area with chain stores further out.

Star Gazer across the berm from Frankford City Park

On the other side of the berm we had a peaceful night to ourselves in the remote wilderness.