After hooking up the power in Ilion Sue told me the air con was dead. I’ll spare you the details, but this led to several phone calls to Greg Auckerman, our NC boat repair tech who installed the system 2 years ago, and some “experiments”, heroically performed in an engine room very hot after a 60 mile run. After these it looked hopeless without an expert repairman, possibly in Albany. There was one more test I’d do next morning that might give the repairman more information.

On the wall in Ilion

The weather has been cooling off nicely in the evening, so we spent a comfortable night, and started worrying less about no aircon until Albany. Next morning we did that last test, and fixed everything completely! So Sue thinks Greg and I are heroes. With some of the hot weather we’ve seen up here this year, only the boat sinking is more important to Sue than the aircon not working.

Part of the Remington Arms factory. Closed this week. 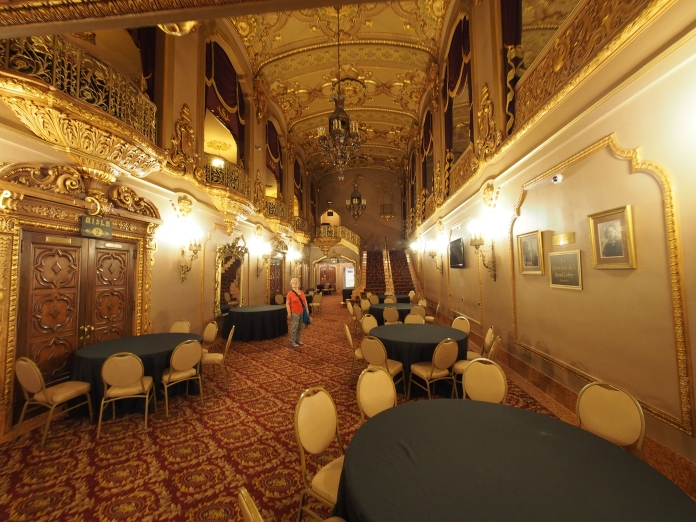 The lobby of the Stanley theater in Utica. Unfortunately we could not see the auditorium part.

You can imagine that if I fixed it the fix must have been pretty simple. In our post crisis discussion the only possible cause Greg could come up involved the boat running unusually fast.* Then I told him that yesterday morning I had reached the awesome speed of 15.3 mph while “blowing out” the engines on Lake Oneida, a new Star Gazer record. I think it was the new bottom paint that smoothed things out down there. With so many ways things can break down on a boat, who would have expected that one?

*Greg mentioned the Venturi effect possibly sucking the water out of zircon cooling intake, air locking the centrifugal pump supplying cooling water to all aircon units. When in the morning I disconnected the pump to verify it was not pumping, trapped air was released (the pump is below the waterline) and it started pumping normally.

One thought on “Ilion”