We just got through the Moorhaven lock and found this small railroad swing bridge closed.

We left the marina at 7:30 Sunday morning and struggled through the Clewiston lock by 8:00. As we approached the lock three smaller boats were already waiting at the gate. They moved out of the way as we approached and let us in first. Then they came in beside us and crowded over at the opposite wall. Even they had trouble holding position with those ropes from on high. 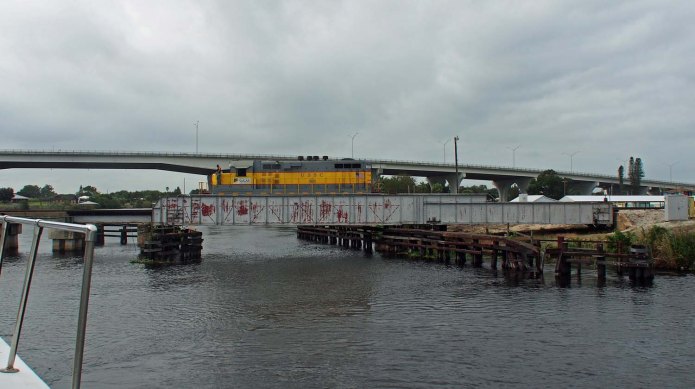 After we floated around for a half hour and engine came across and the guy standing on it got of and somehow opened the bridge.

The Moorhaven lock came just as we turned to leave the lake. Just past that the rail bridge was closed. The lockmaster had told me something about staying tied up to the wall but I couldn’t understand him on the radio. There was no one to call about the bridge. I called the lockmaster again and found that the railroad sometimes is shifting cars around and can leave the bridge closed for a half hour or more. That’s why he offered to let me stay tied up to the lock wall.

We floated around for a full half hour when an engine finally came across the bridge. Someone got out, stood on the tracks and apparently caused the bridge to open for us. I think he had some kind of remote control, but could not be sure. It was a long wait, but the wind and currents were light so we just floated around for the time. 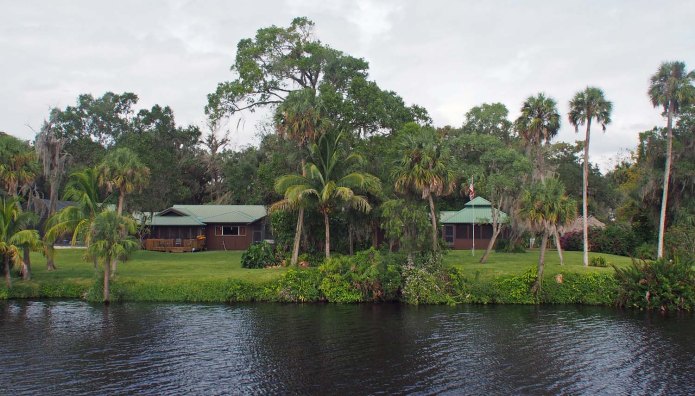 Homes on the canal are not as grand as on the ICW, but they have much bigger lots. 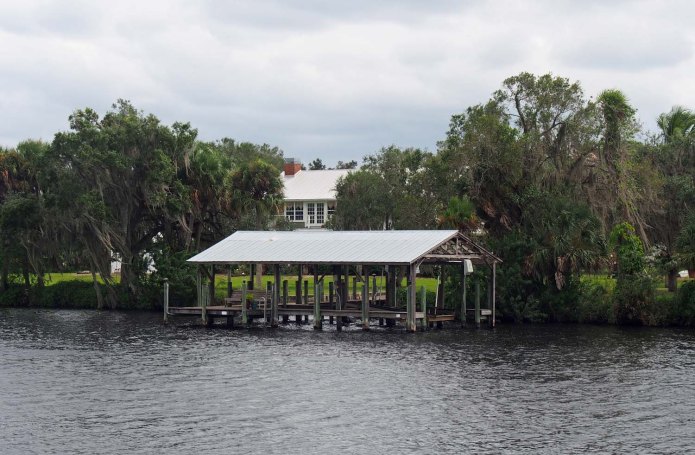 A nice home. Not terribly new or old. Big lot with lots of trees, so hard to see the whole house.

The rest of the trip was easy. There was one other swing bridge that opened as we approached and two more locks, but all were quick with little waiting. A few drawbridges but we could go under all those. It was good it was Sunday, since the Ortona lock is still being worked on and opens only a few times a day on weekdays. Other boaters decided to beat that Ortona lock schedule or that Sunday was just a good day to travel. We passed more boats coming the other way than we have on any other day this year.

We pulled into Calusa Jacks marina after traveling a total of 125 miles since leaving the Atlantic ICW.