A boat on the hard in a shed at LMC east yard. We’re in the west yard with little boats.

During the rest of our kids’ visit at Lauderdale Marine Center (LMC) we dropped the dinghy and took several rides. We retraced our incoming path to downtown Ft Lauderdale on the New River at night. We passed homes decorated for Christmas and a number of tour boats and water taxis. 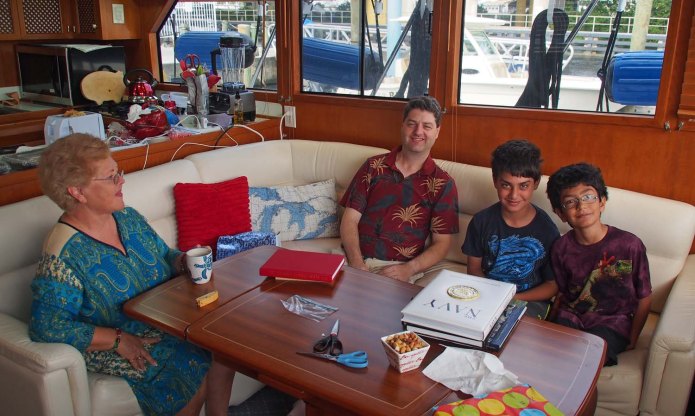 Boys on the boat just after Christmas. Jordan left us just before this.

Later on Adam, Aaron and I went further up the New River past a number of other boatyards, many containing huge yachts both floating and on the hard. We then took a connecting channel southwest to the Dania Cutoff canal. This we took east past several boatyards and residential areas back to the ICW. Just before the ICW we passed under the flight path at the edge of Fort Lauderdale airport. We traveled the ICW north past container ports until we hit Everglades Cruise Port which was empty of cruise ships on that weekday. After that we traveled about 5 miles up the New River back to LMC.

The world famous (?) Jungle Queen. From our dinghy on the way back up the New River.

Adam, the two boys and I took a day trip west into the everglades and had a 3 hour airboat ride through the swamp. Much shorter rides are available closer to Ft Lauderdale and Miami, but only in large 150 – 200 passenger “airboats” at small crowded parks sponsored by some TV adventure show personalities. Our boat could hold 6 people including the driver. The kids could sit right up front as we zoomed over the grass and past trees and water plants. 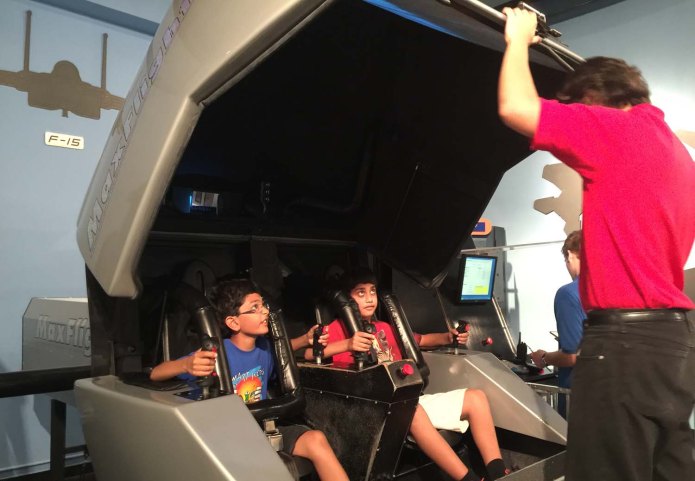 Flight simulator at Ft Lauderdale Science Museum. Not busy so they got extra time.

Maybe the 3 hour trip flying over the everglades was the highlight.

There were beach trips and fishing from the dock. Only one grandkid, Aaron, fell off the docks, and only once.

We floated in the LMC marina for the rest of our kids’ and grandkids’ visit. We took them to the airport Jan 2 and LMC hauled Star Gazer out on January 5.