We spent two nights at our East Mississippi Finger anchorage and got up at 7 to get ready to leave at 8. We’ve had a few cold nights lately where it got down to 52. With a water temp or 72.5 that can raise a mist, but this morning it was totally socked in with fog when we got up. We hoped it would improve by 8 and it did. We got the anchor up and slowly moved out through the sub channels more than a mile to get back to the main channel. The fog was still there, but at 8 we could at least see the bank on either side and a few hundred feet ahead.

Once we were in the main channel the Jamie Whitten lock was less than a mile away. The fog became a lot worse on the main channel. Our only eyes were radar and our GPS position on our charts. When we called the lockmaster he told us he could not see the upper gates from his control room, but said he’d open them if we still wanted to come ahead. Our chart and radar images for the guide wall and lock gates matched up nicely, so we went on and finally saw the side of the guide wall when we were almost up against it. We took it slow into the lock and tied up.

Heavy mist a half hour after we got up.

Morning mist remains, but fog appears gone around our anchorage.

The boat named Journey had left Bay Springs Marina one mile from the lock and, without radar, had to come to a complete stop in a sea of white. He radioed and asked if everyone could wait just 15 minutes to see if the fog might lift sufficiently for them to also get to the lock. Sure enough, 15 minutes later visibility improved to where he could move again and get over to the lock with us. By the time we had locked down most of the fog had gone, which allowed us a good view of the deepest lock on the Tenn Tom with an 84’ drop. 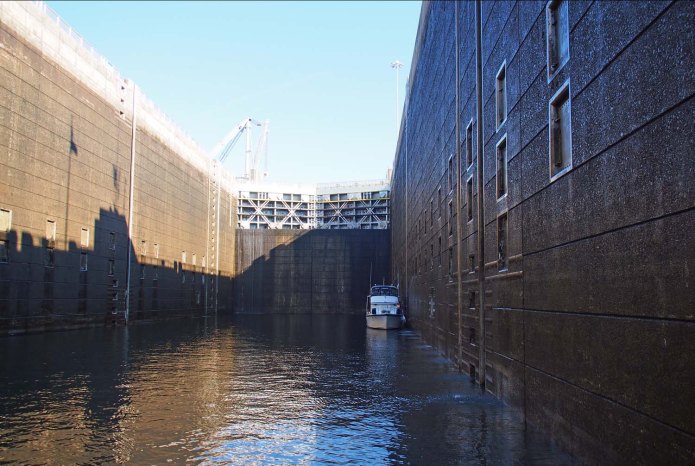 An 84′ drop. The deepest on the Tenn Tom. All Tenn Tom locking will be down to the gulf. Fog is gone.

Driving around in a fog like that may not be the safest thing to do, but neither is stopping in the middle of the channel and hoping you don’t drift the wrong way or that no one will run into you. Now that we’ve become accustomed to our instruments it seems safest for us to just continue on, although at a slower speed.

Clear sailing just out of the lock. Fog is gone down here.

After leaving the lock we also went through the Montgomery and Rankin locks. Overall it was only 20 miles from our anchorage to Midway Marina, so we arrived in Fulton MS before noon. Our friends from our Montana Mission Builders days, Frank and Relda, have returned to their nearby home town of Tupelo MS and will be coming by tomorrow morning to show us the area.