The Alix Ann Eckstein pushed 35 barges around this narrow corner. We anchored short of the bridge.

At least it’s the end for us. We are anchored by Angelo Towhead, at the east end of the island on the Illinois side one mile from where the Mississippi and the Ohio rivers meet. It’s called the “Upper Mississippi” above here and the “Lower Mississippi” below. Looking on Google Maps I just discovered that Cairo IL is a small town two miles north of there, but no presence down here. I guess no one wants a river front home anywhere around here. We did not see one all day today or yesterday. We didn’t see many north or south of St Louis the day before either.

Last night I was thinking of following along with Rayno and Patty, and I just found out they ran over 100 miles and got through three locks on the Ohio, including the infamous lock 52! On the other hand, they completed anchoring and called me well after dark. 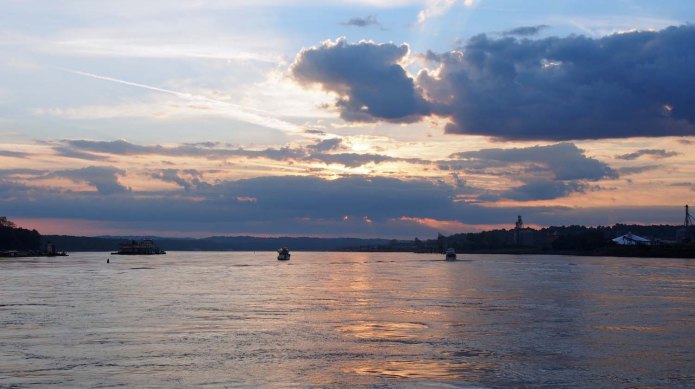 Leaving this morning’s anchorage. Oh Kay is further on. These are two other trawlers from our anchorage.

Sue wanted to take it slow, however, so we all parted ways at 6:30, which is first light around here, and started down the river. We went 50 miles and got here before noon. Sue had it right. We’re the only ones here. There’s about a 2 mph current which keeps us in one place and our new anchor holds great, although when I backed down on the anchor the rope slipped through the windlass pulley grove. We’ll have to look into that.

Here we see an occasional tow pass by. All we’ve seen were upriver, but they don’t rock us much so we’ll have no idea of what passes by tonight. Sue’s getting into anchoring, so we’ll have to do more of it.

From anchorage at Angelo Towhead. Click on picture for more detail of prop wash waves from tow.

While we saw some pretty impressive turbulence in the Upper Mississippi yesterday, today topped it. Our instruments measure current speed, and several times we hit 6 mph currents. The last time was on the outside of a narrow curve which ends at this anchorage. As we approached the curve I saw a tow coming the other way on AIS. I radioed him and he said to pass on the one, so I went to the right, toward the curve outside. As we got closer he told me to hold up. Turned out he was a 5 x 7 tow with 35 barges. I could see the front ones were hugging the red buoys inside the curve. He told me he would bring his rear around and nearly scrape the bank on the outside to turn all the barges. It didn’t take long before he pushed away from the bank and told me to come ahead.

From anchorage out back. Sunset hits US 67 bridge from Missouri on the right to Illinois on the left.

We hit several areas where the depth changed suddenly, say from 60 up to 20 feet. This caused visible current upwelling that could be seen boiling over large areas and batting our bow back and forth. The other turbulence was the waves from tow prop wash. Our bow would crash through those for some time after we had passed an up bound tow. 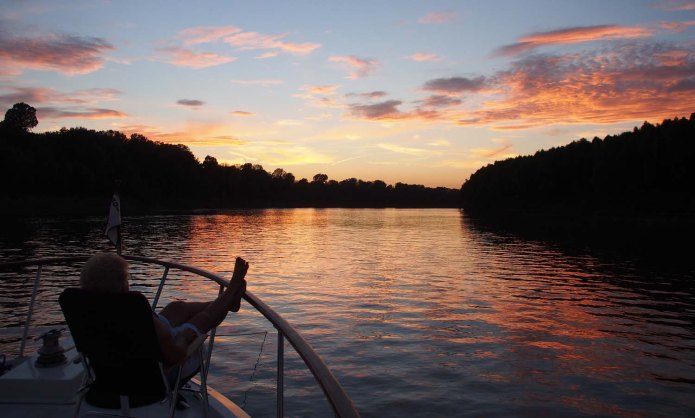 Sue enjoys a sunset. Angelo Towhead Island to the left, Illinois to the right.

Today I learned to wash the chain as the anchor comes up. I was looking at all the mud on the anchor and washing it. I forgot to notice the chain until it was pulled up over the deck into the windlass. I washed it off and got mud running all over the deck. A real mess.

One thought on “End of the Mississippi”