I stopped to wait for the Melvin Price Lock and saw these two behind. Alton Marina just under the bridge to the right.

We got up in Alton at mile 202 at 6:30 on Wednesday and called the lockmaster at Melvin Price lock. It’s only one mile downriver. He said a tow was locking up and would finish in about half hour. He said no one had been locking down for awhile so come on ahead. With a half hour for prep we were off at 7. We stopped half mile from the lock and noted four other trawlers had left and were coming in behind us on the left side of the river. 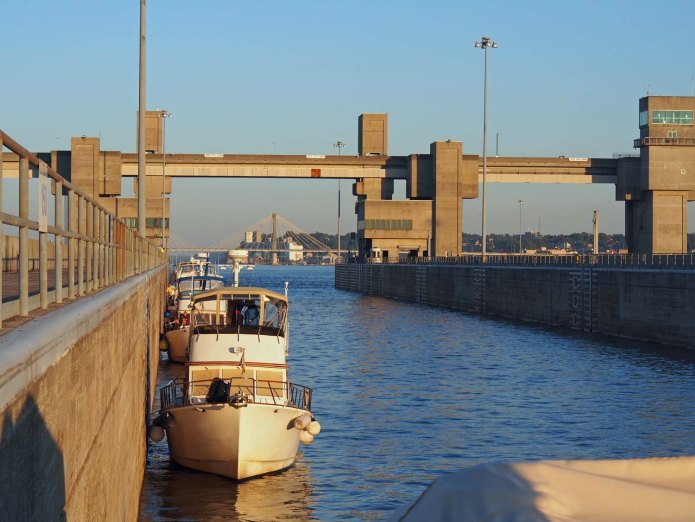 In the Melvin Price lock. Alton bridge again in the background.

We waited about 15 minutes for the tow to exit, tied off along the lock wall and locked down. I’ve heard that one third of the world’s (not just the US’s, but then, I guess they grow rice most other places) grain supply passes through the Melvin Price lock every year, so we were fortunate to hit it with no down bound tows.

4 miles later we all got to Chain of Rocks Lock as an up bound tow was leaving, but had to wait one cycle for a subsequent up bound coast guard boat that was in a hurry. These were that last locks we will hit until we have turned and gone up the Ohio River.

Once free of locks I backed off on the throttles and let the 3 – 4 mph current help us down stream at a dizzying 12 mph. The Mississippi is becoming more scenic with some hills and a few rock cliffs at the river’s edge. While we still see bridges, trains, a few factories and power plants, and of course tows we are pretty much in the wilderness. There is no recreational boating. Our four companions were the only private boats we saw, and two of these were faster and two slower, so we had the river to ourselves.

The iconic shot. Some loopers we went through the locks with took this.

We passed the only marina we’ll see until the Tennessee river, Hoppies, 45 miles south of Alton. It consists of three barges tied to the riverbank, which boats tie to alongside. We did try to stay there, but it was full for the next few days. We instead headed for the Kaskaskia lock and dam, which is on a channel branching off from the Mississippi at mile 118. It was built to allow barge access up the Kaskaskia River as far as Fayetteville 36 miles away, although none of that is on our charts. Traveling 84 miles was pretty easy since we got out of both locks by a little after 9 and had a strong following current the rest of the day.

We finally saw some river front, well river view, homes, but not many.

There is a long wall between the lock and dam just a few thousand feet up the channel where we tied up. Sue practiced throwing a loop of line around a cleat on the wall, securing us sufficiently for me to get on the wall and tie up the rest of the way. Later Oh Kay with Rayno and Patty came in and tied up behind us. Now three boats are here but there is room for many more.

No one has come through the lock across the wall from us, and all good boaters go to bed early, so it is very quiet here.