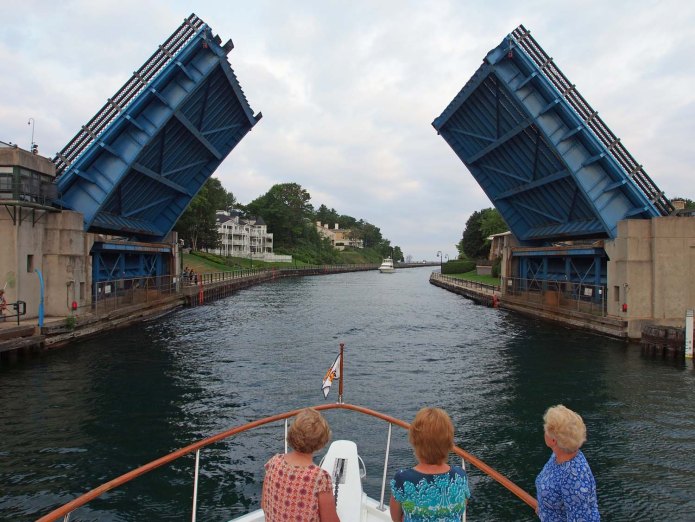 The Charlevoix bridge opens for us at 8 AM.

After two days in Charlevoix we travelled south to Traverse City. Traverse City is at the south end of the 30 mile long Traverse Bay. The NOAA weather site said 2 – 3 foot waves (last night when we were planning this it said 2 foot or less) but we went anyway since we would not be in the rough water for long. Once we left the Charlevoix channel only the first 13 miles of our trip would be in open Lake Michigan waters. The last 30 miles would be protected in the bay.

The first part of the trip was certainly grab a handhold or two if you were to stand or walk, but nothing unusual, and we were able to keep the waves from hitting beam on. We did see a some coast up close at times, but much of the time were kept off by various shallow areas shown on the charts.

The last 30 miles was calm and easy and we came to the harbor at the end of the bay by noon. One reason we were there was that it is the last place to rent a car for Paul and Sharon until we get 3 (or more, depending on weather) days to the south. Sharon and Paul were leaving with Marty and Cheryl to visit them and other relations in the eastern part of Michigan before flying back home, so the trip from Charlevoix to here was the last for all of them. 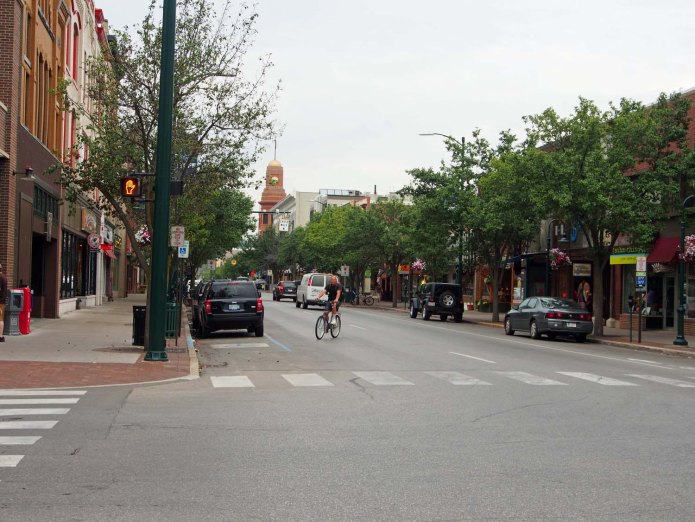 Front Street in Traverse City. Interesting downtown. Largest we’ve seen in the US since Canada.

Traverse city is the largest town we have yet visited in Michigan. It has an interesting main street (Front St.) just a block up from the marina. We plan two nights here.