The chart as well as the radar located this lighthouse (no light!). We only saw it briefly off the side as we passed.

The northern Lake Michigan Monday forecast was two foot or less waves and 3 to 4 mph winds. That promised such smooth sailing with just 50 miles to go that we didn’t bother to get up at 5 and leave at 6 like usual, but rose at 7:30. No pictures of sunrises this morning, but we were off by 8:30.

We headed straight for the south tower of the famous Mackinac bridge and passed a few feet from it, just south of the main span. We went west to the lighthouses at the northwestern extreme of southern Michigan and then turned south through a channel between them. We sailed south and immediately came into a fog with visibility of 500 feet. It wasn’t deep top to bottom because the sunlight came through enough to make things pretty bright. That lit up the fog around us and so it didn’t improve visibility, but did make for a very pleasant fog. All we saw all around us was a sea of white. It was nice to have the radar.

We went right by the base of the south tower.

We saw very few boats except Flight Plan, a large catamaran sail boat. We saw them on the radar, that is. They called us to warn of their presence. We both were going south, but they were going 5 mph to our 10 and asked us to watch to avoid overrunning them. They were the first boat I’ve run into that had AIS receive only, so they could see our direction, speed and everything about us. They had no radar, however. Without AIS transmit they were concerned we would not see them. They described where they were relative to us and we easily found a splotch on the radar to match. Of course I was not about to run over a radar splotch whether I knew what it was or not, but they didn’t know I had radar running until we talked.

It was fun to be able to play with the radar again. I altered our course to take us within a tenth of a mile as we passed them. We had to get right across from them before we could just barely make them out. Had we not been looking we would have missed them. That’s how I know the visibility was 500 feet. 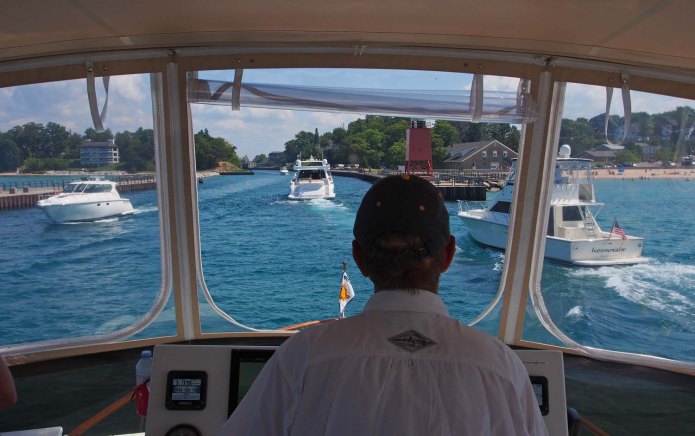 Entering the channel from Lake Michigan a few minutes before 2:30. 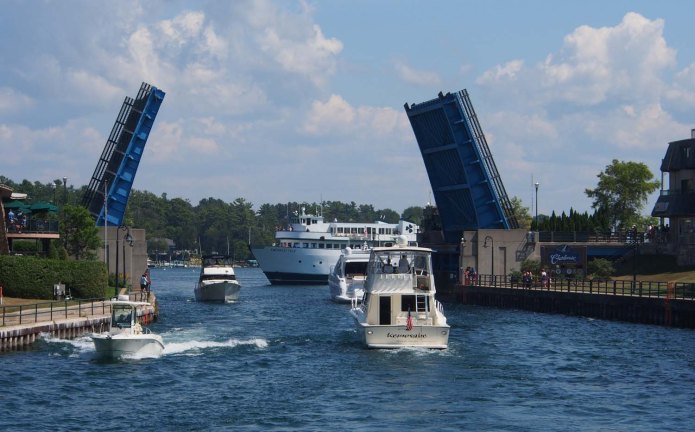 Not what I wanted to see. A large boat closer to the bridge than me.

The channel into the lake at Charlevoix is not terribly wide and has heavy traffic when the drawbridge across it opens every half hour, so I was happy the fog lifted before we approached its entrance. We hung around with a few other larger boats and started in just before 2:30. As the bridge raised a large ferry boat came around the corner on its other side. The channel was large enough for us and it, but without much extra space. The bigger boats tend not to slow down for anything, and this time was no exception. Fortunately the captain was accustomed to the bend in the channel where we met and made it without unduly sticking out either end of his boat.