Many islands ahead Hope the chart is correct about which two to go between.

I have all sorts off weather apps and websites. Some of them really show me whether a storm will hit or pass in the next hour or so, but as far as what will happen tomorrow I have pretty much failed. Keith and Gayle thought they had it figured out when they assumed the opposite of what I said. That did work for awhile, but also proved unreliable.

Anyway, with all my weather knowledge I decided we would leave today on the first leg of our trip through the north edge of Georgian Bay. We’re in the “Canadian shield”, which is made up of a lot of granite. We see a lot that was scraped clean by glaciers and other parts where some soil accumulated to grow trees and such. There are 30,000 islands in the bay and we wound through quite a few of them.

We’d pass between islands like this with considerably less than a boat length between us.

Our charts have a red line showing the path through this maze of islands, sometimes taking us in channels with granite rock out of the water on either side within 30 feet. Often we have to slow down, sometimes to idle speed, to negotiate turns and stay away from those rock islands.

Some of our trip wound through relatively calm channels, and other times we were exposed to the main body of water with 2 ½ foot waves and 20 mph winds. Paul and I started out at 5:45 AM with Sue and Sharon still in bed. They stayed even when we told them they should be up with us, because if we hit one of those granite islands we would probably sink, and their chances might be better up on deck.

The first few hours of the day were cool and windy, and Paul and I decided to move down and drive from below. We did put our new wipers through their paces since the waves and wind threw a lot of water across the salon windshield.

It warmed up a bit, so after the ladies used a calmer spell while we were behind overlapping islands to get hot coffee and some breakfast for us, we returned topside. Sue and Sharon watched the action from the salon as we passed between and around island after island. Sometimes a channel appeared to take us inland, meaning between a larger island group and the real inland.

Parry Island protects Parry Sound from the main bay waves and weather. It is quite large and has its own bridge.

Finally we went through a number of channels making our way to Parry Sound, said to be the deepest natural freshwater port in the world. I had not counted on any more drawbridges until we reach Chicago, but we ended up waiting half an hour just a mile from our destination for a swing road bridge that opens on an hourly schedule. We reached Parry Sound Town Docks about 12:30 and tied up to the concrete wall. 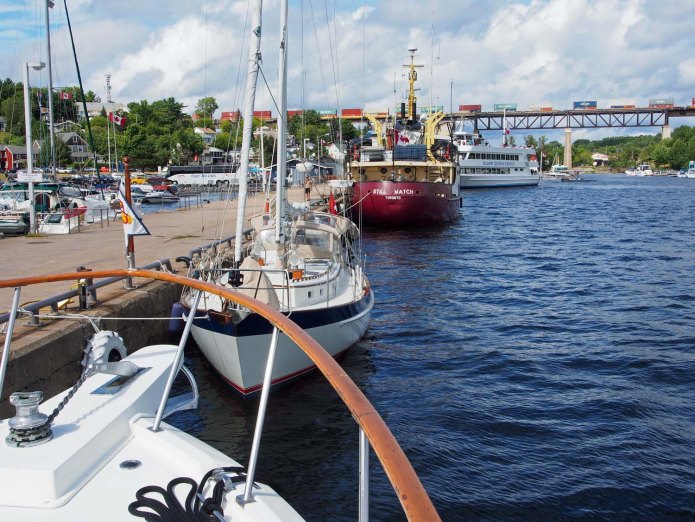 We’re out at the end of the Parry Sound town pier (they call it a dock). Main street starts a block beyond this pier.

With all the wind and waves on our trip, at least it didn’t rain, but that started once we tied up. The rain did lift later, and we went out to see some of the downtown area and try out a restaurant.